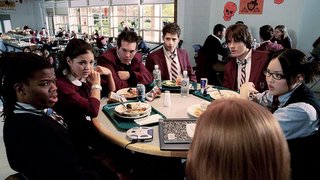 The scariest thing about the latest slasher dreck to the hit the multiplex is having to pay money to see it. Perhaps I’m being too harsh. Where to begin? First of all, the film has the gall to be rated PG-13. I have a great idea! Let’s make a movie about a killer attacking and killing teenagers and let 8 year-olds in! While the film is hardly family fair, the film is insultingly directed toward the under 15 crowd. It’s not very surprising, but after all most slasher films are loaded with blood and gratuitous sex, so therefore by cutting out all the good stuff, we adults are left with a Mary-Kate and Ashley attempt at horror. I’m not buying it. Well, unfortunately I did, at least it was only five bucks.

Director Jeff Wadlow, who won a short film contest that gave him the chance to make this train wreck, attempts to add some flash and style to his flick. As if that could help the fact that his shaking camera makes some shots virtually unwatchable. This isn’t The Blair Witch Project after all. Many shots even seem to be a commercial for Abercrombie and Fitch, minus nude models. The score is painfully annoying, dialogue is eye roll inducing, and the acting is… you guessed it.

What of the story? The problem here is that there seems to be too much and yet not enough going on all at once. After a local girl is murdered, a brainless group of stuck-up teens at a nearby private high school decide to spread a rumor that it is the work of a serial killer dubbed The Wolf. They send an email to everyone in the school warning them of the killer’s o.m. Online technologies play a part, most notably instant messaging. According to the film’s logic, one can sit in front of a computer and someone can send you an instant message without ever having actually signed on. Of course. Wouldn’t you know our main character British-accented Owen, the new kid, keeps getting threats from someone claiming to be The Wolf. And wouldn’t know accusations fly faster than the audience out of the theater. There’s something in here about lying and telling secrets and a bunch of other bologna. Any attempt at a “plot twist” results in forehead slapping. The problem here is that nothing even remotely scary happens until nearly 70 minutes into the movie (which isn’t really scary anyways). And sorry to spoil it for you, but the body count is exceptionally low. In fact the whole movie is just a red herring. I knew that PG-13 rating had something to do with it. There are plenty of solid PG-13 scary movies, such as The Sixth Sense or The Ring. It is one thing to make a slasher movie that has bad acting and a bad script; it is another to leave out the blood and guts. I think Jared Padalecki should have just gone on to House of Wax 2 instead of headlining this drip of a film. The rest of cast is made up of a bunch of unknowns who seem to be dooking it out to play the lead role in some WB dramedy. Are these Dawson’s Creek’s rejects? Rocker Jon Bon Jovi takes a role as a teacher. His record sales must not be doing so hot.

This is a sad excuse for a horror film. A slasher movie where hardly anyone dies without a hint of bloodshed? Did the Goosebumps guy write this? All of the ten year-olds in the audience seemed to be having a fun time. Why couldn’t I? You’d be better off with reruns of Are You Afraid of the Dark? GRADE: F
Posted by Chris at 9:37 PM

They may be generally light in weight therefore they may be preferred by those those who are into sports. As of late rolex replica and also other digital brands inside the marketplace are developed with some hublot replica sale sense so you'll not be shocked to seek out a digital timepiece that could catch your attention. Given the tag heuer replica sale inside the market place these days, plenty of are getting them as gifts and jeweler. Men's watches and rolex replica sale can act as incredible gifts to any person who loves them during a special occasion like birthdays, anniversaries, weddings and so on. Nevertheless, for gifts and replica watches uk a timepiece you pick has to be 1 that oozes class and prestige. One can find a thousand and 1 brands to choose from which can fit this, prime among them getting fake rolex sale among other people. Its imperative that you simply know the brand of watch you like before ordering.