Tale as Old as Time: “Brokeback Mountain” Breaks Through to the Mainstream 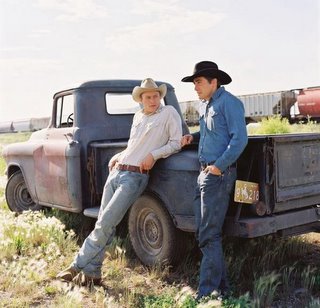 What are the great romances in film? We have the ever-repeated cinematic representation of tragic love with Shakespeare’s Romeo & Juliet. There’s never a dry eye in the crowd, or an awake person for that matter, during screenings of Casablanca. And we all gave a damn when Rhett totally dissed Scarlet after 6.5 hours in Gone with the Wind. All of these loves had two things in common: tragic departures and man/woman love. Could modern audiences ever give a hoot when seeing the same exact story poured out on screen with two men falling hopelessly in love? While many independent films have given homosexual love its due, director Ang “Crouching Tiger” Lee’s splendid Brokeback Mountain just may make history.

While filmed with a low budget Focus Feature’s Brokeback feels like anything but an independent film. It has all the elements: we have seemingly uncomplicated camera shots and movements that utilize every bit of creativity as artistically possible, a straightforward story, no flying spaceships, oh and sexual scenes that would make Madonna blush (not to mention most of our Government leaders). We start off with a spectacularly poetic opening. Two young men, in 1963 Wyoming both take jobs herding sheep through Brokeback Mountain for the summer. The two gentlemen bond as men usually do during outdoor gatherings. But something’s different here. What begins as simple brotherly friendship soon turns into passionate love. The men are played radiantly by Heath Ledger and Jake Gyllenhaal. I don’t know what’s better, Australian born Ledger’s sensationally authentic southern accent or his powerful facial expressions that pour out words in lyrical form. Ledger will be dooking it out for an Oscar this year. Lee wrings out uniformly excellent performances out of everyone.

So what we have here is a compromising situation: after their summer o’ love, both men part ways destined to live “normal” heterosexual lives because that’s what the world is telling them. Their hearts speak differently. The film mainly focuses on the life of Ennis (Ledger) and his marriage to Alma (Dawson’s Creek’s Michele Williams in an emotionally wrenching Oscar-worthy performance). After four years, Jack (Gyllenhaal) decides to follow his heart and contacts Ennis. This leads to several “fishing trips” that consist of…not fishing. These trysts take place in the only place that will truly accept them: nature. It’s their natural love and affection for each other that get to the audience so convincingly. You don’t see this couple as two men, you seem them as human beings. Whether conservative groups will see the same thing is another story. But this is a realistic portrayal of how real love can’t be denied.

Brokeback Mountain, vulgarly dubbed “the gay cowboy movie” since its times-are-a-changing production hit headlines, is a movie that can easily appeal to a wide audience if people are willing. There’s just as much heterosexual lovemaking as homosexual lovemaking for those who feel it’s just two men doin’ it the whole time. The film is never sappy although it’s sad. It’s never lapses into stereotypes which is why this is a seminal film for this time period. This is a movie that portrays an onscreen love many people will want to categorize as different but will ultimately realize that it’s just the same. Romeo and Juliet and those other classic love stories are gone with the wind. Brokeback Mountain is a stunning and deserving slice in the historic cinematic timeline. I think the big ape has some competition; the Oscar race is on. GRADE: A
Posted by Chris at 5:59 PM

Hello! Someone in my Facebook group shared this website with us so
I came to look it over. I'm definitely enjoying the information. I'm book-marking and will be tweeting this to my followers!
Terrific blog and wonderful style and design.