Cheesy “Win a Date with Tad Hamilton!” Worth Winning and Watching 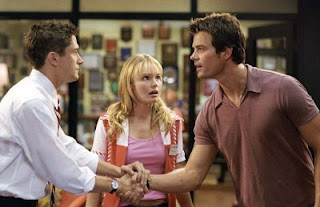 Okay, I have to admit that nothing is more of a guilty pleasure than a cheesy romantic comedy. The newest one, Win a Date with Tad Hamilton! is the eponymy of cheese. In fact, I would have to say this film invented cheese. Am I losing you yet? I hope not. Stay with me, cause the plot is simple, but the payoff is a rather amusing little film that will eventually fade away until its spectacular 2-disc ultimate extreme special limited edition uncut DVD release.

The story gets off the ground when a single, cute Piggly Wiggly checkout girl, Rosalee (charming Kate Bosworth) enters an internet contest to win a date with Tad Hamilton, a fictitious Hollywood hunk (Josh Duhamel) who’s priorities are all messed up. He had been caught drinking and driving by the Paparazzi. His manager and agent (Sean Hayes of TV’s “Will & Grace” and Nathan Lane) advise him that his clean-cut Hollywood image needs some sprucing up. “Congratulations. You're actually drinking, driving, smoking, leering and groping at the same time,” one of them informs him. The online contest, which benefits starving, sick children or something like that (how’s that for image improvement), “Win a Date with Tad Hamilton” gets underway. And wouldn’t you know it that lonely little Rosalee just so happens to win the contest and she’s off to L.A. to have the date of her dreams. The night goes well with only minor mishaps, such as her getting car sick in front of her dreamy beau. Rosalee goes back home to her normal life, but low and behold Mr. Hamilton follows his heart and wants more than just a date with this everyday sweet girl.

To make things worse, Rosalee’s boss and best guy friend Pete (a non-shaggy Topher Grace from TV’s “That 70s Show”) is secretly in love with her, but he can’t bring himself to let out his feelings. How will Rosalee be able to choose between her fantastic Hollywood leading man and the nice boy who has been there her whole life? Wipe your eyes, please. The rest of the movie is devoted to Pete complaining about how Tad’s not the guy for Rosalee but he is and Tad trying desperately to charm his way into her life. How is this really any different from all the other romantic cheese-fests out there in your local Blockbuster? I actually cared about these characters and was amused by what motivated each one. I felt the emotional instability Rosalee experienced and even laughed along the way. Pete’s attempts to prove to Rosalee that he’s the man for her are no less than comical. In one scene, I guess Pete proves size does matter. The humor is clean and doesn’t make you want to revisit your lunch. There aren’t any overflowing toilets, bodily fluids or fart jokes. I believe the film to be a small-scale 21st century version of the romance films from the 40s and 50s.

Many aspects of Tad Hamilton really made me enjoy it as much as I did. The film in-jokes were pretty amusing such as Rosalee’s dad’s (Gary Cole, of Office Space fame) attempts to become more “Hollywoodized” by researching Tad’s filmography and donning a Project Greenlight shirt. The film’s conclusion is out of a classic Hollywood romance and, in fact, out of one of Tad Hamilton’s own films, which was exciting nonetheless.

Overall, I enjoyed what was happening onscreen and was caught up in the world of Tad Hamilton. The actors do their best of portraying their appealing, albeit thinly written characters. Grace’s biting wit entertains, Duhamel’s Tad is charming (what girl wouldn’t want to win a date with him?) and Bosworth is delightful. She really carries the film. She will hopefully move on to more serious film projects. With any luck she won’t be doomed to spend her career in guilty pleasure cheese like this, but like any good actress she needs to start somewhere, and besides, who doesn’t like cheese? GRADE: B
Posted by Chris at 9:25 PM

They have put their names and reputations behind replica watches. The corporate has been within the montremaking business for better than one hundred fifty years. Computerized montres and chronographs and every style and line that hublot replica ukces is available to you. Both montres for women and men are available. Gold, stainless-steel and a wide variety of fake rolex sale and bands are available. The enterprise was rolex replica extremely successful for various many years due to the fact they usually focused on good quality but in addition had an eye for innovation. This enterprise accomplished several accomplishments for montres which includes the very first montres to possess replica watches and mechanical winding that is some thing that is seen on most otherwise all montres today. They are also responsible for the smallest rolex replica sale with a perpetual calendar.