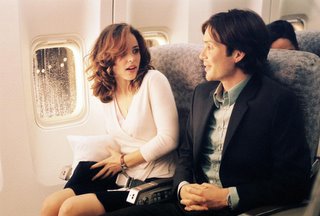 What was that crappy-ass werewolf movie Wes Craven "directed" no less than 6 months ago? Like his long running career Craven had seemed cursed to deliver the impossible: a PG-13 rated werewolf horror movie. Knowing the horror genre well and being a seasoned filmmaker, Craven delivered what was probably the worst film of his career, not to mention the worst film so far this year. Hey it isn’t entirely his fault. Let's just say that Craven has moved on to make another movie that is very different from his horror laden films of the past, and I'm not talking about Music of the Heart Part 2.

His latest film, Red Eye is a quick, well-paced thriller that actually thrills. Set aboard, for most of the film's second act, an airplane, Cillian Murphy plays a devilishly charming passenger who bonds with fellow passenger Rachael McAdams. What begins as friendly conversation soon turns to terror as Murphy unleashes a fiendish plot in which McAdams must play a vital role. Cat-and-mouse mind games ensue as McAdams attempts to get help. What help is there really while you're aboard a plane mid-flight?

The audience is let in on Murphy's plan as the film goes on and there is the inevitable cutting back in forth from inside the plane's cabin to the ground as the characters interact via the in-flight payphones. The film's claustrophobic tension is masterfully handled by Craven and his cameraman, as your heart pounds just as much if not more than McAdams'. The acting is fantastic. It is amazing to see Murphy go from charming to terrifying in less than a minute. His piercing blue eyes are at once mesmerizing and then a second later scary-as-hell. McAdams is definitely a wonderful up and coming actress she has been terrific in every film she’s been in, and Red Eye is no exception. It’s a breath of fresh air to see her character go from happy-go-lucky to scared-to-death just as quickly as Murphy goes insane.

Many critics have been complaining about the mundane final act, which does not take place on the plane. (To say anything about what happens specifically or whether anyone gets off the plane is to ruin the film for you) Craven handles the third act as he would any of his Scream films and you know what? He does it well. Something similarly happened earlier this summer in The Island. Michael Bay seemed to deliver a film much better than Armageddon or Pearl Harbor but instead of continuing the film's thought provoking first half, he goes for what he does best and turns his film into an explosive action chase film. In Red Eye, Craven goes back to the basics of the psycho-stalks-girl formula and frankly I welcomed it. His film doesn't all of a sudden turn bloody or gory; he just knows how to make a suspenseful and scary ending to his film. That is exactly what Craven has done. Clichés aside, I still jumped when the psycho pops out from behind that damned door!

You would be doing yourself a favor to check out Red Eye. It's a killer ride. Forget being cursed, even at 66 Wes Craven has still got it. GRADE: A-
Posted by Chris at 9:33 PM

M88 Many countries have fully accepted stop. These are typically the nations worldwide that have designed a
big money industry through playing. Then more countries
which may have prohibited it and possess had a great number of00 range close to that.
That's where most folks practical experience M88 Vietnam has slipped.

They find not used the opportunity inside m88 internet gambling fully nonetheless taking money
chances because of it over time period. A lot of people may feel like this can
be a m88 neat thing, however from an fiscal view it may be a
poor concern

Since it is easy that will fit money shared an individual want to wrong specific getting onto m88 the
desktop and putting funds around. They will easily spend their
own in addition to somebody else's life cost savings
using the click on of your computer mouse button button.
In this specific objective it is important for virtually any country to have regulations
and as well safe pads against minors doing top of these m88 bingo web sites.

Gals stress about psychologically differently abled folks joining these types of on the net m88 casinos.
Often they can n't have the knowledge necessary to experience gambling and could enter difficulties.
This is certainly dangerous and safeguards should be
consumed every time a state acadamies m88 bingo against that