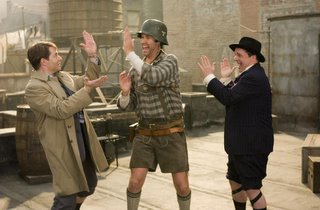 I think I’m in the minority here, but I didn’t really enjoy the musical Cats. I guess I just didn’t get it: a bunch of ballet dancing felines was supposed to make me emotional? What about Les Miserables? No one was more miserable than me. I had to find other ways of keeping myself entertained for its 3.5 hour running time and that didn’t include singing along. What’s my point? Perhaps I’m not the best judge when it comes to Broadway because the shows everyone seems to love I just think are so-so. The Producers comes to mind. There seemed to be so much hype built up that when I actually saw the show a singing Nazi army and costumes with huge pretzels hardly seemed to do anything for me. I definitely think my point is that if you loved the staged version of The Producers you shouldn’t really keep reading this review. The big screen version of the movie seems to fizzle when it should sizzle. It’s merely an average filmed version of the stage musical and doesn’t really add to the medium in terms of style or substance.

Having that off my chest there was plenty to enjoy about the film and surprisingly it was SNL alum Will Ferrell. Will Ferrell has never really done anything for me. He’s a funny guy sure, but he plays the same guy ad nauseam. Here he plays a whacked out German whose fondness for the Leader of the Third Reich is beyond anything you’ve seen him do before. The role seemed tailor made for him. For those of you who have no clue what this guy has to do with the story here goes: Max Bialystock (Nathan Lane), a Broadway producer and general sleaze, and Leo Bloom (Matthew Broderick), an OCD emotionally imprisoned accountant, plan to produce a flop so they can run off with the financial backer’s hard earned investments. The play they decide to produce is written by Franz Liebkind (Ferrell). Uma Thurman shows up as a Swedish actress/secretary Ulla to add additional comic relief but fails to be very funny or to have a consistent Swedish accent.

Lane and Broderick reprise their famous roles from the original musical and unfortunately (or fortunately?) I didn’t get to see the show with them in it. Here director Susan Stroman seems to forget that she has a camera in front of her actors and not a packed house. Overacting is on the menu in this film and it’s the one thing that truly bogs down the entire production. The jokes are funny although there are too few that work but the main stars seem completely wrong. I never found Broderick to be that comical and here everything about his character seems completely forced. His love of his baby blue hanky borders on annoying. Stroman wants to push the actors over the top when she should really be pushing the story over the top. The film is crying out for an R rating, but despite some mild raunchiness this isn’t Mel Brooks’ most potent writing. And lastly Stroman fails to use the film to her advantage. She stages some numbers outside of the Broadway office but there isn’t too much of a vision here. We end up with a carbon copy of the stage musical.

The most positive aspects of the entire production were the musical numbers. They were pretty much reproduced from the musical, but many of them have a let’s get up a dance feel to them. The old lady number and the song “Keep it Gay” are the definite highlights. When it comes to singing in film one has to be weary about that line of reality and the stage. Take the recent film Rent for instance. In my review of that film, I commented on the awkwardness of the realistic setting of the film with the characters breaking out in song. In the world of The Producers you totally buy it.

If you enjoyed the musical of The Producers, like the recent Phantom of the Opera and Rent, you’ll love their cinematic counterparts. I can recommend the film to those who haven’t seen the show because paying 8 bucks is a lot cheaper than paying 75 bucks. However, in general as a film, The Producers fails to advance the medium and is bogged down by over the top performances from its leads. Mel Brooks, there is something missing here. Fans expecting something along the lines of Young Frankenstein or Spaceballs might want to think again. Oy vey. GRADE: C+
Posted by Chris at 11:01 PM

Excessive barking is often a common dog behavior problem you could possibly face.
A good self-help guide to use for this is always to make sure
your scissors are held parallel for the dogs eyes while cutting.
While Dachshund is only a tiny dog, they tend to be reserved to aliens and these are good watchdogs and bark loudly.
bladders usually are not fully developed until after they've grown; so they will often not be
in a position to hold it in. The last part of an Pomeranian hair cut is usually to trim the hair about the feet that increases the dog a rabbit
foot look. If this it really is your very first time to
take care of the dog, or would like to do so, one of the best choices is the Shetland sheepdog.
One of these hormones, insulin, controls the uptake of glucose into cells.