Mulan Rouge: “Memoirs of a Geisha” Not Very Memorable 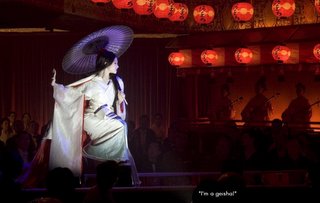 Movies certainly have taken me to a great many places recently. I’ve been to Munich, in, you guessed it, and I’ve been all over the Middle East in Syriana. I just got back from Japan and boy are my arms tired. Wow that joke never gets old. I must say that my knowledge of Japanese culture is limited to two Kill Bill movies and doing origami while I’m bored at work. Having said that I went into Memoirs of a Geisha knowing very little about Japanese culture. Whether or not I actually learned anything is another story. What was a detailed and fully satisfying book (which is what I’ve heard, since I haven’t read it) has been turned into a Lifetime movie of the week with extremely high production values.

Essentially what we have is a “Cinderella story” as one critic has put it, in that we witness a young girl’s willful struggle to achieve the status of a geisha, which means art. Or something like that. What seems essentially like a beautiful prostitute without the whole selling of one’s body for sexual purposes part, the life of a geisha is apparently something for a young girl to look forward to in life. (Or that’s what the film seems to be portraying) We start off with a young girl who is sold to a family full of Mommie Dearests. Good thing there are no wire hangers to be found. We have the Japanese version of Jennifer Connelly (I have no idea what her character’s name is or the actress) playing the snobby older “sister.” We have the raspy-voiced chain-smoking matriarch. And also a woman who could very easily be friends with Buffalo Bill from Silence of the Lambs (who coincidently has a small role here as an American colonel) because the poor girl gets the hose, a lot. It’s a tad difficult to really follow the story, as I don’t know the politics of geisha-dom. When grown up our hero (take a glance at imdb.com if you want to know her name cause I have no clue) gets a female rivalry right out of Showgirls complete with catfight and corny dialogue. Every time I heard lines like, “I want a life that is mine!” I couldn’t help but chuckle. What about “We do not become geisha to pursuit our own destiny.” I was almost waiting for Yoda to show up.

Many are saying the film misses the dramatic impact and factual details of the novel and replaces them with beautiful photography and fabulous costumes. These people are correct. It does some have great cinematography: a young girl’s face is lit with orange lighting while in the foreground two women are shaded with blue lighting, all in one shot. Japan is a beautiful country and the film reflects that. The set design is also a striking achievement, as the screen is not filled with gratuitous computer generated images. Director Rob Marshall (Chicago) obviously wanted to give the film a certain look, which he achieves but there’s not much else. The performances are fine but the characters are either too flat or not developed enough as Marshall would rather the shot look good instead of giving his actors personalities.

At the end of Geisha we’re left feeling empty and slightly annoyed. We have a film that only scratches the surface of a story that is dying to be told. All we have is interesting shots which are definitely not enough to overcome the emotionally unfulfilled feeling we’re left with after the film is over. I felt slightly cheated because I hardly learned anything more about Japanese culture than what I already knew. And from me that’s saying a lot. GRADE: C-

There are quite a number that you can pick from if you look
for one in the web. Throughout the month of August, rental of accommodation in the villas will almost boost.
Apart from this, there are many real estate
portals like Propertywala.

This site was... how do I say it? Relevant!!
Finally I've found somethhing which helped
me. Thank you!

my page :: african mango plus reviews

I avoid movies with "Memoirs" in the name