Deconstructing Woody: Allen is Back in the Game with “Match Point” 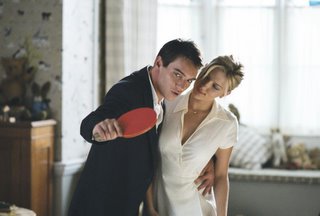 Match Point is a winner. Perhaps it’s the change of setting for the director. Perhaps it’s a change of genre for the director. Perhaps it’s because his last few films were garbage. Anyway you look at it Woody Allen is in complete control of this wicked new entry. Allen spins a story of lust, love and some other stuff that I shouldn’t be telling you about unless you’ve seen the movie. So if I were you I’d stop reading and go see the film. I’ll try not to spoil anything for you.

Match Point isn’t a comedy although it has a chuckle here and there. It has what appears to be a straightforward tale told with a lot of juice. Jonathan Rhys-Meyers (a British Joaquin Phoenix sporting a similar upper lip scar) is Chris, a tennis pro, who gets a job teaching tennis lessons at a ritzy club. Here he meets Tom (Matthew Goode) whose sister is Chloe played by Emily Mortimer (an older, British Kirsten Dunst). Tom is engaged to Nola (a role I’ve finally enjoyed Scarlett Johansson in). Chris and Nola definitely have the hots for each other. You see how this is all going to play out right? Hardly. This is a typical setup for any ordinary romantic comedy, a great Woody one in fact. This film decides to take a much darker road.

The tennis metaphor is well played in that winning the game has just as much to do with luck as good skill. We also get a reflective two-sided deal as tennis is game played by two people. This is reflected in everything from the characters’ wardrobes such as some sporting white shirts and black pants, while the other wears a black shirt and white pants. We are constantly getting subtle shots of characters facing each other with opposite shading. One shot of Chris and Tom has the corner of the room diving the screen with a shadow on Tom’s face with a light background while Chris’ face is in the light while his background is shadowed. Fine detail. And that tennis net plays an exciting role here as well.

This is the king of film that just gets better and better as it goes along. You get wrapped up in it and can’t wait to see how it plays out. It’s definitely more fun than watching a tennis match (sorry Anna and Andy fans). It’s a little twisty but not in a way that you expect. If you go see an M. Night Shyamalan movie you sit there waiting for the twist. When you see a Woody Allen film you expect nothing but to be entertained and he does that in such a splendid way. He has all his familiar touches from using golden oldies to underscore the drama to the same-fonted opening credits that he’s used since he first started making movies. Allen is an expert in making you believe everything that is going on. The way the characters converse seems real. He makes characters talk over others because that’s how we chatter in the real world. As the film proceeds, Allen seems to be entering new territory by surprisingly paying tribute to Hitchcock. Perhaps that’s why he has set his film in England instead of his native New York. Allen is a film lover himself and no one is more respected in cinema than the Master of Suspense.

Change can be good and change can be bad. In this film’s case change is definitely good. Everything you love about Allen is here and he delivers in spades. But there is something definitely new here as well. I commend Allen for doing something slightly against type and I applaud his artistic work. Here we have a fascinating tale told in an expertly particular way. It’s dramatic, sensuous and most importantly smart. It knows exactly what it’s doing. Allen’s films are definitely an acquired taste, but with a movie like Match Point, why wouldn’t you want to take a bite? GRADE: A

I just like the helpful info you supply for your articles.
I'll bookmark your blog and check once more
right here frequently. I'm rather sure I'll be told plenty
of new stuff right right here! Good luck for the next!


Feel free to surf to my page :: over the counter testosterone supplements

Not all are true. Everyone has their own way of thinking but I think they have to reconsider. I like to argue for the most accurate results.
http://fivenightsatfreddysplay.com