Do You Really Want to Hurt Me?: Eli Roth Tortures His Audience More Than He Hoped in “Hostel” 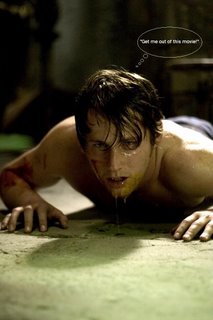 “Hostel” has a couple things going for it: Quentin Tarantino’s name (he gets an executive producer credit & his name above the title) and its R-rating. One thing guaranteed when it comes to horror and the Restricted rating is gore, gore, gore. Unfortunately it takes so long to get there we could have turned on FOX and been completely satisfied by now. I appreciated what director Eli “Cabin Fever” Roth is trying to do: he wants the audience to cringe and squirm and look away. However, he’s having us do that for all the wrong reasons.

The film is definitely a step up from Cabin Fever a film that utterly confused and bored me. Was it being played for laughs or was it serious? It had pointless and stupid written all over it and of course with a follow up being released barely a week into the New Year, I certainly planned for the worse. Hostel could easily be retitled American Die, after all those teen sex comedies, because the film has more T&A than anything past 11 on Cinemax, and the main characters are obnoxious party boys who are looking for… you guess it, T&A. Paxton and Josh are backpacking through Europe and pick up an Icelander named Oli on the way. They go here, they go there chasing female tale like a bunch of ravenous wolves. It’s not so much that these characters are annoying or clichéd its that I picture the entire audience for this film are alive in the main characters. And seeing as though this film made oodles at the box office, I’m slightly disturbed. The main guys land at this strange hostel in Gowhackastan where the hotties are hot and there are no dudes around to cramp their style.

The film makes its biggest mistake by killing off the wrong characters at the wrong time. The more tolerable of the American twosome, Josh, bites it first and he’s the only character even worth being invested in. It’s the annoying jerk, Paxton that gets to escape. But perhaps that’s the film’s point. The characters don’t just simply die. You see, in this filthy place, rich sadists pay to torture others, cut them open, and do whatever they please with them. Perhaps by keeping the more loathsome of the two alive we get to see him suffer a lot more. These characters barked up the wrong tree and boy do they get it. Or do they?

If you haven’t been living under a rock, you’ve probably seen the numerous TV ads toting this film as the most disturbing film you’ll see and that ambulances had to be called at test screenings. I think viewers were dying of boredom. We don’t get a single drop of blood for an hour into the film! This would be fine if we were watching a smart, psychological thriller that doesn’t linger on blood and guts. But this film is being marketed as the most disgustingly vile piece of celluloid to hit the big screen since Showgirls! Maybe I’m just desensitized to graphic violence but there’s nothing to get too worked up about in Hostel. We get typical slashes and gashes but for a genre of film that relies on the fear of the deformation of the human body it’s an awfully long haul to the good stuff. Don’t torture yourself, rent High Tension instead. At least that film didn’t use Quentin Tarantino’s name in vain. GRADE: C
Posted by Chris at 3:59 PM

After going over a handful of the articles on your web site,
I truly appreciate your way of writing a blog. I saved it to my bookmark website list and will be checking back soon.
Please check out my web site as well and let
me know what you think.

Generally I do not learn article on blogs, but I would like to say that this write-up very forced me to try
and do so! Your writing style has been amazed me. Thanks, very nice post.