Is “Bubble” in Trouble? Steven Soderbergh’s Experiment Gets Everything Right 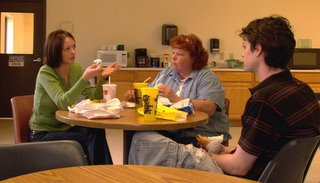 What is a bubble? It actually has more connotation than one would think. You think of the childhood fun of blowing bubbles and chasing them around the yard. They would come in all sizes. Some would last longer than others. Some seemed to just float through the air for all of eternity. Some would find a rough surface and pop. Others would just land and dance magically in the breezy air. And how has the word bubble come to be used in our every day vernacular. “Oh he lives in a bubble.” A bubble can be an entire world encased with anything anyone could possibly want to be able to live. In director Steven Soderbergh’s daring experiment known as “Bubble” he paints simple, mechanical everyday working life and what happens when something unpredictable comes in to burst the routine.

Everyone seems to be making a lot of hubbub about the distribution strategy put forth for Bubble by Soderbergh and the film’s company. Bubble is being simultaneously released in theaters, on DVD and on pay cable all at the same time. What nerve! How are theater owners supposed to make money if you can rush off and by the DVD? Well first of all the film is being shown in about 20 theaters so they probably won’t make money anyways. This film isn’t a summer blockbuster folks. If anything, this bold experiment is simply there to get the film to be seen. Is going to the theater to see movies on the way out? Hardly. Really, Bubble’s release strategy is simply a gimmick. Remember 3D? Remember Odorama? Remember electrified seats? They simply existed as testament in the, “We’ll do anything to get people to see our movie” category of moviemaking. Now back to what Bubble is all about.

On the surface, Bubble isn’t about very much. The first time actors play workers who are employed at a small town factory assembling toy dolls. We have Martha (Debbie Doebereiner) a middle-aged woman caring for her elderly father. Martha drives her young co-worker Kyle (Dustin James Ashley) to work every morning. The two have an easy, working friendship despite their age difference. Their lives are plain and they share more in common than you’d think. They are in their own little world. Their own bubble if you will. Enter Rose (Misty Dawn Wilkins) who without batting an eyelash seems to disrupt the humdrumness of Martha and Kyle’s lives, in very different ways. The acting by these first time performers is flawless. The film handles everything from dialogue to looks and gestures with simplicity. It fully captures what it is like to be in a routine and just be REAL. The filmmaking is as simple as the story and characters. Soderbergh moves his camera very little as if not to disturb Martha and Kyle’s lives. As if not to burst the bubble. These people’s lives are very fragile, like a bubble, and anything could easily agitate it.

An unspeakable event occurs that disrupts these simple lives and makes you question what these people are all about. Soderbergh handles the material extremely well, whether it’s his symbolic use of filtered lighting (a Soderbergh trademark) or capturing the unpredictability of what life throws at us. And it’s exciting to see a filmmaker not forget his independent roots. Bubble has so much to say and is brilliant in its execution. The viewer is simply fascinated by something so everyday. In any other movie what happens in Bubble would just simply be boring, but here we have an intriguing look at fragile lives in a very fragile world.

Whether you see the film in the theater, on DVD or on TV, just see it. That’s Soderbergh’s point. I hate to burst your bubble, but this film doesn’t signify the death of movie going. It embraces it. GRADE: A
Posted by Chris at 1:12 PM

Very good site you have here but I was wanting to know if you knew of any
forums that cover the same topics talked about in this article?
I'd really love to be a part of community where I can get opinions from
other knowledgeable people that share the same interest. If you have any suggestions, please let me know.
Many thanks!