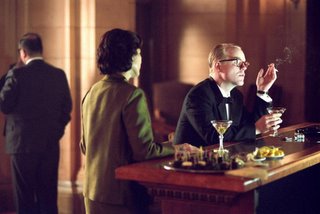 Philip Seymour Hoffman is always good. Remember Boogie Nights? Amazing. Remember The Talented Mr. Ripley? Amazing. Remember Twister? Oh yeah he was in that. He was the “suck zone” guy who freaked the heck out of Jami Gertz. Oh what the hell? Amazing. Anyways, Mr. Hoffman gives the performance of his career as quirky author Truman Capote in the subtlety fantastic Capote. He’s always great but here he simply shines. As does the film.

The audience is introduced to a shocking murder in the Midwest, as is Mr. Capote and his friend Harper Lee. (Catherine Keener) She would eventually write the seminal literature classic To Kill a Mockingbird. Two men murder a family in the middle of the night. One of whom Capote becomes very attached to in prison. Capote refuses to see a monster. He wants to see a human being. Capote’s visits to this criminal named Perry, played well by Clifton Collins Jr., have two motives. He wants to know everything about the unspeakable crime that was committed because he wants to believe that a person can be redeemed and he also wants information for a book he is writing. Perry believes that Capote’s help will possibly get him out of jail. Is Capote trying to help release this man and clear his name? Or does he just want juicy info for his nonfiction account of the murders? The two men have a similar relationship to that of Jodie Foster and Anthony Hopkins (or is it Antony Hopkins, Gwyneth Paltrow?) in The Silence of the Lambs. Foster desperately needs Hopkins in finding another criminal. Here, Capote needs his inmate for another reason; he needs to find his muse.

Capote eventually decides that the story he is writing will become his life and perhaps the best thing he’s ever written. There’s not too much else in terms of plot, but what’s so amazing about the film is the way the material is handled. We never get to see the horrible crimes until just the right moment. And when we do it’s almost unbearably disturbing. The viewer gets to understand Capote in certain ways: his strange voice, his eccentric social behavior. But what is really going on inside his head? Seymour knows and by the film’s end the audience wants to know as well. And before we know it we, along with our hero, are faced with a decision. Are we to believe that Perry can ever be deemed fit to enter society again? Or does he deserve to succumb to the harsh American justice system?

The film never delves into overly dramatic moral issues. This isn’t an anti-capital punishment fable. There’s no preaching of any kind. What we have instead are characters who just are the way they are and it’s up to the viewer to decide for him or herself what is morally right and wrong. We have a beautiful film with beautiful images. The film wants to coexist in a world where evil and good can run into each other at any given moment. And I believe any viewer comes out smarter having seen it. GRADE: A-
Posted by Chris at 12:33 PM