Monkeys, Cowboys & Terrorists, Oh My: Best Films of the Year 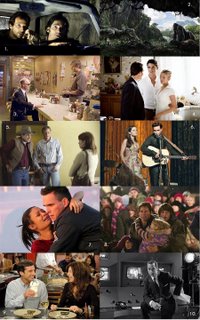 2005 could simply go down as the worst year for the best movies. Was this the year no one went to the movies? With the “box-office slump” taking front-page news throughout the year movie executives, critics and myself wondered what exactly was everyone’s deal? I hardly had to worry about long lines and finding seats. And I believe the only sellout film I’ve seen was this past November when I saw Just Friends (ahh, life’s little mysteries) This year gave us thrills, chills and definitely a lot of spills (Fantastic 4? Chicken Little?). I laughed a lot this year at the movies and my eyes got a little glassy at times. I saw over forty films in the theaters this year, many of which I saw twice or thrice or more (Revenge of the Sith wins with 4 total theatrical viewings). For all the good and bad movies I saw there are plenty that I didn’t see. Since being a professional film critic isn’t exactly the easiest of gigs to get I had to shelve out dollar after dollar after dollar to see these films and I didn’t mind at all. The ones I didn’t see are because I don’t live down the street from an art house. That being said I looked long and hard at the films I did see and did my best to pick what I believed to be the year’s best movies. I loved A LOT of movies this year and my Top Ten could become a Top Twenty with a snap of a finger. So, now I give you without further delay what I believe to be the top films of the year, in a very particular order, from one to ten of course, 2005’s Best Films of the Year:*


1. Munich
This is one of Steven Spielberg’s best films. It is the perfect blend of Spielbergian thrills and heart wrenching drama. It works on so many levels and is completely relevant in any time period with any audience. This revenge tale is told with sophistication and is exciting from start to finish.

2. King Kong
Peter Jackson has certainly been the king of movies lately. His Lord of the Rings trifecta certainly hasn’t slowed him down. This adventurous remake pays tribute to the 1933 original and expands and even improves on it. We have an emotional thrill ride that is definitely worth sitting in the theater for 3 hours to witness it.

3. A History of Violence
David Cronenberg, obsessed with bodily deformation and sexual violence, certainly doesn’t skew far from the track in this thrilling story about a small town man who becomes a big time hero. The moral of the story is you can’t escape your past and you certainly can’t escape Cronenberg’s masterful direction.

4. Match Point
This certainly is a year for seasoned directors. Woody Allen leaves Annie Hall in the dust with this psychological drama set far away in England. Socioeconomic class and sensuous affairs play a part in this intriguing story of lust and love.

5. Brokeback Mountain
Ang Lee turns stereotypes on their heads and kicks ‘em to the curb in this absorbing romance set in Wyoming during a period of nearly twenty years. This romance is between two male ranch hands who end up handling more than sheep while on a summer sheep drive. Because of this love that dare not speak its name we end up with broken hearts and broken families and one of the year’s most emotional rides. Splendid performances from everyone involved push this film towards classic cinema status.

6. Walk the Line
Joaquin Phoenix and Reese Witherspoon are simply sensational in this moving biopic about the late, great country star Johnny Cash. This film moves you and makes your legs ache from all that foot tapping. A wonderfully timeless story told in a wonderfully timeless way.

7. Crash
Superb ensemble drama dealing with racism in Los Angeles starring people you’d never expect. We get terrific performances from an outstanding cast and an extremely important message about tolerance. People’s true feelings are splashed up on the screen and they come flying back making you realize perhaps we should make this world just a little bit better place to be.

8. War of the Worlds
Spielberg returns to the genre that gave him a household name: horror. This is not a science-fiction film. This is not a fantasy. This is not an adventure. This is a flat-out scary thrill ride that pits human beings against a seemingly unstoppable enemy. This is one of the year’s best popcorn shockers.

9. The 40-Year-Old Virgin
The year’s best comedy stars Steve Carrel as he tries to woe Catherine Keener while his friends try and help him out with his middle-aged sex crisis. Dialogue has never felt fresher or more hysterical. Great performances and a surprisingly moving love story definitely make this a step up from your average romantic comedy.

10. Good Night, & Good Luck.
This is one of the year’s best films made all the more better because of its limited budget. This film feels like it was made in the 1950s: from its stark black & white cinematography to its uniformly excellent cast. George Clooney directs this enthralling film about heroic journalist Edward Murrow’s attempt to take down Sen. Joseph McCarthy.

Normally anyone that shows his or her do not like intended for 8 ball pool hack 2014 could possibly be regarded
a good outcast. The 8 ball pool hack 2014 failed
to seem to bring about waste materials and also could not possibly be obtained in forested acres, jungles, streams, lakes, seas,
and so forth. With each passing day, new technology is being developed and with new technology, new games and new platforms are also being developed.

I have read so many articles on the topic of the blogger
lovers but this piece of writing is truly a pleasant article, keep it up.