American Woman: “The New World” is an Un-Disneyfied Romantic Epic for the Art House Crowd 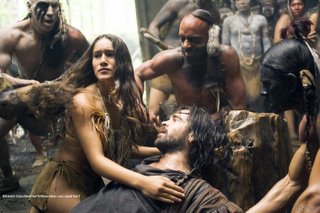 Director Terrance Malick certainly has painted his film The New World with all the colors of the wind. But you won’t find a talking animal sidekick anywhere. Who doesn’t think of the animated Disney film when mentioned the name Pocahontas? The story is of Captain John Smith and his settlers exploring the “new world” and finding no gold and plenty of local “savages.” In this beautiful rendition, we get plenty of beautiful shots and symbolic editing, sparse dialogue and poetic narration. That old Disney movie can walk the plank with Captain Hook. Malick, who previously helmed the Oscar-nominated World War II drama The Thin Red Line, has merged art house pathos with majestic epic storytelling to create a moving film about two very different worlds.

The New World is presented in a way that is much different from a typical romantic epic. Instead of getting cheesy dialogue we get whole scenes with hardly a word. I don’t think there’s any dialogue in the film until about 10 minutes in. Malick (who also wrote the film) lets the main characters give poetic commentary while scenes play out with gestures, facial expressions and stylish jump cut editing. All of this stuff wouldn’t seem to make sense if this were Titanic or Troy or any other big epic film. But because we are in the world of the Native Americans it really works. You are transported back through time to a world unseen by Caucasian eyes. In the lead as Capt. Smith is Colin Farrell in a fairly poignant and restrained performance. His eyes say a lot. The Natives are at first fascinated with this strange man, as if he were from another planet, soon he's welcomed into their tribe. There he becomes infatuated with the young Princess Pocahontas. Fifteen year-old Q'Orianka Kilcher brings the character to life. She’s wonderfully naturalistic. Scenes with her and Colin Farrell are splendid. They explore each other in sensual but not sexual ways. Anyone hoping for hardcore White on Native action should continue brousing the Internet.

I was surprised at how much time Malick spends giving us what are, in most films, normally second unit shots. Perhaps nearly 40 percent of the film is composed of shots of birds and trees and flowing rivers. These images come together to represent nature and how these Natives have been able to both respect the land and use it to survive. This is juxtaposed with the White settlers who don't want to pilage (how nice of them), but eventually want take over everything. The camera seems to be placed at a different angle for every shot and so much is said with either the slightest movement, without any words at all. James Horner’s haunting score adds to the images wonderfully.

The acting is superb and the film is just one marvelous production. The film is long without ever seeming so. This is a film that you can see for entertainment and still spend hours dissecting it. I’m anxiously awaiting Malick’s next film 7 years from now. Malick has created a brilliant artistic vision about true life people without ever having to tell us its "based on actual events." GRADE: A-
Posted by Chris at 8:28 PM

In today's world of financial complications and time restraints, most
individuals prefer watching movies from the comfort
of their home at a time that is convenient for them.
The movie's best scene may be the brief moment she
laconically but pointedly confronts another couple in their child-loss counseling group, questioning
their reasoning that it was God's plan and He
needed another angel. However, it could easily fool you
into thinking otherwise because its portrayal of a professional sports organization is spot on.

Absolutely adore all of these steam showers

Feel free to visit my homepage - steam and shower [pics.quantumnet.de]