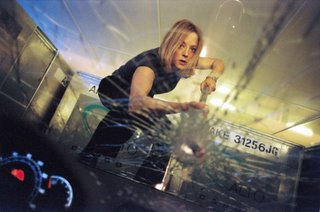 If you happen to be one of many people who have seen the countless number of ads for Flightplan, the latest movie guaranteed not to be your next in-flight film, you know that Jodie Foster’s young daughter disappears on a plane mid-flight. “Have you seen my daughter?” she asks. “Julia! Where’s Julia!” she screams. There’s plenty you already know going into Flightplan, and there’s a little bit you don’t know. It’s what you don’t know that is just a little bit hokey. If you’re willing to let a few things by, you have a good time.

The first hour of Flightplan is well executed and has great performances. Jodie Foster plays Kyle Pratt, a mother who has recently been through a terrible tragedy. Her husband was killed in an accident after plummeting to his death off a roof. Kyle works as an engineer of a new super duper airplane that has two floors and a galley and a whole bunch of other jetliner lingo hiding places. Kyle is pretty miserable and far from over her husband’s death. She is traveling from Germany, where she lives, to the States, with her hubby’s casket in tow below. She has one person left to love: her 6 year-old daughter Julia. Or so she thinks. Foster is completely at ease in the role and you suffer just as much as her. When her daughter seems to just vanish out of thin air you wish you were right there searching the plane with her. The flight crew is helpful but not altogether very bent on really helping her out. Where’d they get these people anyways?

The opening of the film sets up the possibility that perhaps Kyle is suffering from a mass delusion: that both her husband and her daughter were killed. Why is this? Apparently there’s no record of the little girl ever having been on board. So we get to play is she insane or is there something else sinister going on? After all the film is called FlightPLAN.

The third act stretched credibility but nonetheless works in a way that is successful in bringing the plot elements together. The supporting cast is good including the ever-flexible Peter Sarsgaard and Sean Bean as the pilot. And I don’t know if he likes movies about gladiators. To say anything else about the film’s plot would ruin the fun.

The film is technically well-made and although it would seem as though the director (Robert Schwentke, who is, you guessed it, German!) would seem limited in such a small, cramped space he makes it work, as did Wes Craven in last month’s Red Eye. No doubt comparisons to that film will be made. If you are looking for pure thrills and heart-pounding suspense I’d suggest Red Eye. If you’d rather have a less suspenseful, more “is that lady just a wacko” storyline stick to Flightplan. Both films tend to give up believability toward the end, but at least they do it swiftly and well. GRADE: B
Posted by Chris at 9:40 PM

Breakfast seems like a huge challenge, since it is so common in our
society to eat toast and cereals, however there are some tasty options that are child-friendly.
Her scheme worked for it is said that Marc Antony fell madly in love
with her. Instead of focusing on a futuristic goal such
as losing 10 pounds, focus on what you are doing every day to become healthier.

Wow! At last I got a webpage from where I know how
to in fact take helpful data concerning my study and knowledge.