Return of the King: “Kong” Remake Puts the Motion Back in Motion Picture 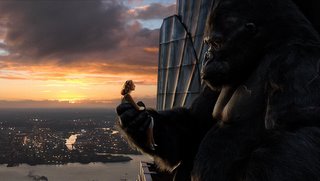 Lord of the Rings director Peter Jackson has made a moving, emotionally resonant epic adventure – all without a Hobbit in sight. It takes somebody who made three 3-hour plus films all at once to get the nerve to take on the king of all movies, King Kong. He has succeeded in a) paying tribute to a classic film without seeming pretentious (take note Gus Van Sant) b) recreating a stunning 1930s New York City c) making the audience buy everything that is so completely outrageous about a story involving a huge gorilla that falls in love with a woman and runs amok in the city only to climb the Empire State Building and have more than his heart-broken. Even at its three hour running time King Kong never seems long-winded, it is fast, fun popcorn entertainment with all the emotional weight of an intimate drama. We’re reminded why they used to call these things moving pictures.

When you sit in your seat and await the start of King Kong get cozy, cause you don’t see ape boy for a while. And that’s definitely not a bad thing. Remember you didn’t see the shark in Jaws until, oh, 45 minutes before the final credits rolled. Jackson along with writing partners Fran Walsh (his wife) and Philippa Boyens have created largely appropriate backstory for our main characters. In the original 1933 version, meager Ann Darrow is caught stealing an apple and catches the eye of film director & adventurer Carl Denham. They talk for a few minutes and before you know it they’re sailing to Skull Island to make the greatest picture anyone has ever seen. Yeah, like that would ever happen. Here though we get completely convincing character motivations and a paying tribute to the passion of making movies.

The leads are now played by Naomi Watts (in a stunning performance) as Ann the struggling actress and Jack Black as Carl (slightly strange casting, but he does the job adequately) the amoral (we’ll learn why soon) film director. We get characters that are wholly developed. We now fully accept that Ann will venture to an uncharted island (or as Carl tells the crew, they’re headed for Singapore). Of course we add in Oscar winner Adrien Brody as Jack Driscoll, who in the original was a hardened seaman, but here he's a seasoned playwright and screenwriter to Carl's film. Jack falls for Ann (and vice versa) but he's not the only one...

So where does the giant gorilla fit into all this? Well he’s our tragic hero! At first seen as a monster, especially by the island’s disturbingly, unhinged natives, we learn that Mr. Kong has feelings too. The natives capture Ann and use her as an offering to the great primate, with Jack, Carl and the ship’s crew in tow (one of which being toughened Billy Elliot). Kong is an especially lovable animal, yet his viciousness towards everybody and his passion towards Ann make for an interesting love triangle. Jackson fully plays out the connection between Ann and Kong which was very much missing from the original. Although the original Kong showed he was truly King of the Jungle, his flings with the constantly scared Ann lacked any emotional depth.

And what an adventure this island offers! We get dinosaur stampedes that would make Jurassic Park’s John Hammond jealous. And an eerily disturbing gigantic bug sequence gives The Temple of Doom a run for its money and who could forget the fleshy man-eating worms that crawl out of the sceen and under your flesh. Let's not overlook that heart-stopping T. Rex fight... times three. After nearly losing his life, Carl decides he wants to skip making a movie and wants to make history by capturing Kong alive and putting him on a Broadway stage complete with tribal dancing and vaguely familiar Max Steiner music. Somebody call PETA! Jackson has crafted an intense, fun and wholly fascinating adventure that ends with a spectacular final showdown atop you know where.

King Kong is a film that has everything and can appeal to the widest possible audience. There's enough fantasy to please the Rings nuts and enough realism to turn on the fantasy dismissers. If you thought Jerry Maguire had everything (sports for girls, romance for guys, wait, strike that, reverse it) wait until you see King Kong. This is an epic that will set new standards of movie making and storytelling and will stand the test of time just like its predecessor did (and I’m not talking about that crappy Jessica Lange, monkey-suit version). And did I mention all this with nary a Hobbit in sight? GRADE: A
Posted by Chris at 5:40 PM

We absolutely love your blog and find the majority of
your post's to be just what I'm looking for. Would you offer guest writers
to write content to suit your needs? I wouldn't mind composing a post or elaborating on a lot of the subjects you write about here.
Again, awesome website!