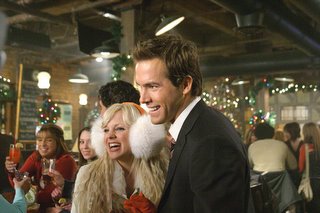 The film Just Friends takes place in a magical world (free of hobbits thankfully) in which ugly people become pretty and pretty people become ugly. Of course this is just on the outside. It’s what’s inside that always remains the same. If you’re willing to buy that up and coming uber-stud Ryan Reynolds was at once a big-hearted obese nerd who used to lip synch to songs by All-4-One than you will be pleasantly surprised by this light, fluffy romantic comedy. As directed by Cruel Intentions’ Roger Kumble, Just Friends is a fun trip down suburban memory lane into a time anyone with adolescent orthodontic work will remember dearly.

Rooting for the romantic leads to get together in the end is one of the delights in viewing a film like this because we don’t need to worry about twist endings and who’s gonna bite the dust. We know how everything will end up, but it’s the road that takes us there that’s enjoyable. And a good trip always begins with great company. As a once geeky teenager who grows into what we see in films like Van Wilder and Blade: Trinity, we know Reynolds is anything but a loser. He has always been in love with his best friend from high school, Amy Smart, but a humiliating graduation night makes him leave his small New Jersey hometown to pursue a life of great things. He ends up as a music producer. Now a ladies’ man, he ends up stuck back near his hometown with a hysterically obnoxious Brittany Jessica Aguilera pop star. She’s played by the tremendously appealing Anna Faris of the Scary Movie films. She plays her pop princess better than anyone else ever could hope to and she’s just enough to recommend the film to others. One highlight comes after her plane takes a sudden detour as she screams out for Ashton Kutcher of Punk’d to come out of hiding. If this girl gets the right script with the right director she may just act her way to comic Oscar glory one day.

So back in his suburban birthplace he’s forced (while practically babysitting Faris) to spend some time visiting his mother and younger brother while seeking out the girl of his dreams since he’s in town. The story of course is mildly entertaining but it is the writing and terrific performances that make the grade. Everyone does just what he or she is supposed to. Julie Haggerty from my favorite film Airplane! plays Reynolds’ mother with an innocent glow. She’s like so many suburban mothers out there that even her one-dimensional character is fleshed out because she’s practically like our own mother. So let’s see here. The pop princess likes our main guy Reynolds while he goes all geeky again without the fat suit because he can’t confess his love for hottie Amy Smart who is being love hunted by pretty boy Chris Klein who is in fact pretty ugly on the inside. Phew! It seems like we’re entering Roger Altman territory or something.

No, this isn’t Altman or even Woody Allen at his worst. This is innocent fun that doesn’t get irritating or boring. It has charm and class and wants you to like it. It has characters that want to steal scenes and say witty things and just wants to entertain you. If anything it just wants to be your friend, just friends. GRADE: B
Posted by Chris at 9:46 PM

Thank you for some other informative web site.
Where else may just I am getting that kind of
information written in such a perfect method? I've a challenge
that I am just now working on, and I've been on the look out
for such info.

My site ... after effects tutorial motion

If it doesn't, pull out the manual, and check to see if there's
anything else that you need to do. " Do keep receipts and bills of all expenses incurred in the accident to be presented to your insurer. When playing golf you want to know of which you are usually choosing the best tools offered on the course.