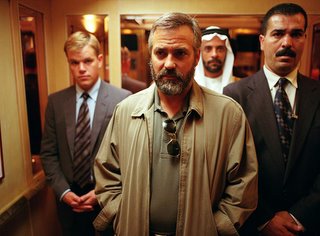 I’ll be the first to admit that, at times, I can be as dumb as Paris Hilton is on a good day. At least I have a college degree. (Give me a little credit) I never really enjoyed History class in high school, I used a certain yellow & black companion to get through English and I don’t think I knew what IRS stood for until about a year ago. Having got that out of the way I must say I was both intrigued and wildly confused during the newest political drama to come out of Hollywood since oh, last week. From the makers of Traffic as the trailer so proudly exclaims comes Syriana a movie so tightly made, with such strong performances and so much going on that if you’re intellectual with a strong knowledge of global issues you’ll get it and if you’re well, like me, you’ll nod your head and just go along with it. Never since the first Mission: Impossible have I been so into what’s happening onscreen, yet had no idea what was going on at the same time. That’s inspired movie making.

So what exactly is going on in this knock of corporate power? Much. We have several different storylines ala let’s say Magnolia or Crash. However, the relationships between the characters are more much significant. Syriana, as you probably know, is about the globe’s powerful, and possibly corrupt, (didn’t see that coming did you?) oil industry. The film takes us around the world from the Persian Gulf to DC to Sweden and back again. The film is as multi-layered as its set of characters. We get a glimpse of the oil field workers (including Pakistani youngster played by Mazhar Munirwho) who get laid off because two of the world’s most powerful oil corporations are merging. We get CIA operative George Clooney with one scraggly looking beard, who is investigating who knows what. We get energy analyst Matt Damon, who fits comfortably into his role, (Amanda Peet is his wife in a potent but too small role) who becomes buddy-buddy with a powerful Gulf prince. We also follow attorney Jeffrey Wright, who channels that guy from Good Morning America with ease, as he refines the merger of the aforementioned oil companies. And what would this film be without your Armani-wearing corporate big boys in their clean offices as they shake each other’s hands for a business deal well done (great supporting performance again Chris Cooper).

So what does all this add up to? We get to observe (through a sometimes shaky camera) the inner workings of a massive machine and how all the little components make up the conglomerate whole. I think I’m doing pretty good so far right? Paris, eat your heart out. The film works on the same level as the film Traffic, which deservedly won Steven Soderbergh a best director Oscar several years ago. Syriana’s plot weaves itself in a very similar manner, but with a different subject. They make two very good companion pieces. The captain at the helm this time is (Oscar winner) Traffic screenwriter Steven Gaghan who does a great job of getting the viewer caught up in the corruption onscreen at nearly every minute. The nontraditional music score by Frenchman Alexandre Desplat helps tell the story. I knew when to feel suspense and when I could relax just from his music.

The film has an obvious leftist bend, which seems refreshing and overdone at the same time. However, any film that Republicans are sure to argue about makes it all the more worthwhile. Speaking of which, according to an anonymous message board poster at a popular movie website, “What ever happened to movies that were entertaining? I am a conservative who agrees with the war, but as a normal human being I'd like to watch a movie that is entertaining.” I guess I’m not as dumb as I thought I was. Hey I’m all up for movies that are entertaining, but of course what could be more entertaining than watching a conservative squirm in his seat watching a film like this? Sadism at its best. Paging Michael Moore, get your next film, Sicko, out stat. GRADE: B+
Posted by Chris at 10:08 AM

This far-reaching implication stylish female form Global Limited 1000, openwork design carved into fake watches clover. As the light and angle changes, lobes will show different light, such as offshore clouds like a dream, but can be rolex replica through the lobe under the movement of its beauty. Aspect previous cartier replica sale show is always the most complex process, and look at the complex process of hublot replica sale not miss Tourbillon, chinese people love the fake rolex sale has a unique tourbillon plot, but this limited edition 100 to commemorate the success of china's first manned space flight 10th anniversary of replica watches sale can not even be missed. This hublot replica uk with titanium to create, through the embossed pattern background disk grinding into a "lunar surface" like effect, in order to allow the wearer to be able to enjoy such a beauty, this watch is not the slightest excess in the design, not only simplifies the time standard decoration, but also the most simple replica watches sale type pointer, all just for highest visual experience.