Devil in a Nightgown: Skip “Exorcism of Emily Rose,” Stick with “Exorcist” 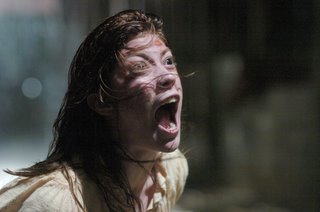 It’s amazing that whenever a character is possessed by a demon in a film it is always a young girl and she always wears a damned nightgown the whole time. As if attempting to add something new to a scary devil possession movie, director Scott Derrickson decides to add a little courtroom drama to the stale proceedings. As if you couldn’t tell from the film’s marketing campaign, the film follows the “true” story of a college girl named Emily Rose who becomes demonically possessed. What the ads don’t tell you is that the movie is simply a made-for-TV courtroom drama told with some cinematic style. The film attempts to avoid obvious comparisons to other demon films such as, oh let’s say, The Exorcist, by not having the girl’s head spin around or having her puke pea soup. However, she does some wildly unnerving bodily contortions that creep up your spine. That’s about it.

The film isn’t so much about the exorcism of Emily, as it is about the trial of the priest accused of her death after he performed the ritual. Father Moore is played well by Oscar nominee Tom Wilkinson. He is joined by another great performance by Laura Linney, as Father Moore’s lawyer, who continues to amaze even seven years after playing Jim Carrey’s phony wife in The Truman Show. The conflict in the film isn’t so much what will become of Emily because that’s ruined in the first 3 minutes of the film, but whether Linney’s agnostic character will come to believe in evil demons that are supposedly around us. And also, will this hotshot lawyer make partner in her hotshot firm. This spiritual conflict occurs in several cheesy scenes involving Linney awakening every night at 3AM (the devil’s hour of course!) to strange sounds and smells. Yawn. In fact, it’s not even a surprise that 3AM will play such an important role in the film as the camera tracks in on her watch striking 3:00 in what has to be the most obvious close-up as if to say “Hey viewer! Pay attention to this!!” We’re not that stupid Mr. Derrickson.

The story is told in flashback with Father Moore’s trial taking most of the screen time. Since we know what happens to Emily and that Father Moore survives (unlike the priests in The Exorcist) very little suspense is sustained. What glimpses of Emily’s life we do get really don’t do anything for us. We don’t get to know this girl except that she gets accepted to college and we learn that she is easily prone to demonic possession. Who isn’t after all? Maybe she should of stopped sleeping in the same nightgown Linda Blair never really made fashionable over 30 years ago. There are a few chills and thrills to be had here and there, mostly due to the loud soundtrack. The camera work is decent and the film doesn’t rely too much on CGI scares. Although I’m pretty much sick of scares involving other characters’ faces violently changing into demonic visages, i.e. The Ring, White Noise, The Grudge, etc… That’s old hat.

The film basically works if you believe that demons could exist and if you find religious morals fascinating, but for your 9 bucks, I’d recommend staying home and catching the latest Law & Order marathon on USA and finishing the evening with The Exorcist right before bedtime. At which point feel free to slip into your nightgown, if you dare… GRADE: C
Posted by Chris at 9:36 PM

This is a very good tip especially to those new to the blogosphere.
Brief but very precise information… Thank you for
sharing this one. A must read post!