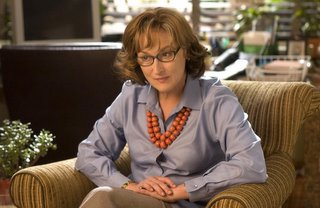 If there’s anything we can learn from the movies its not to let your family have total control over your love life. Of course that’s part of the premise of Prime, a new romantic comedy that owes more to the likes of Woody Allen than to Cameron Crowe or Rob Reiner. On the surface Prime, which was written and directed by fairly new guy Ben Younger, seems like any other boy meets girl tale. We get to see a relationship form, falter and you know the rest. We get a vastly religious family who breathes down the boy’s neck because the girl’s not Jewish! Is this just a retread of My Big Fat Greek Wedding? Not at all.

The film plays with the formula and relies first of all on character. Meryl Streep plays Lisa, a therapist who has a long time patient Rafi played by Uma Thurman. Rafi is recently divorced and from what we can gather from just one scene is a mess. That is until she meets the man (or boy) of her dreams: David (Bryan Greenberg). But he is only 23 and she’s 37. Rafi’s not so sure she wants to rob the cradle. That’s not really the worst of it. You see Lisa and David are mother and son. If that wasn’t bad enough, David has an extremely Jewish family (although they certainly aren’t as crazy as those Greeks).

The film’s humor comes from fleshing out the characters and placing them in awkward situations. Such as Rafi coming to David’s apartment. She thinks he has a couple of normal roommates, but the plastic on his furniture tells her otherwise. David lives with his grandparents. David’s friend Morris decides the best way to get even with a girl that refuses a second date is to slap her in the face with a pie right at her doorstep. A great scene occurs in a Crate & Barrel store as Lisa spies on her son and Rafi and ends up nearly hiding underneath a bed. A sales girl lets her know that she’s disturbing the other customers. There is some suspense as we’re let in on things along with the characters. We don’t find out right away that David is Lisa’s son and then Lisa does find out about the couple but neither David nor Rafi know that she knows. Phew!

The film has an interesting visual style that seems more reminiscent of Woody Allen at his most creative. We get some handheld camerawork and some night color lighting. The camerawork is never annoying. It’s subtle enough to not make you nauseated; yet we know it’s there. It is an overall well directed film. Younger gets the most out of his actors. Streep is especially good, after all, when isn’t she good? She slips into her role with ease. I wouldn’t say it’s a stretch for her, but she does it well. The look on her face when Rafi talks about having sex with David is priceless. Thurman and fairly newcomer Greenberg are also very good. The film is realistic, feels fresh and is very enjoyable. It doesn’t end with a cliché although it does have its obligatory “You had me at hello speech.”

Prime is a showcase for actors who are in top-form. It is witty, romantic and never makes you doubt that Prime is high class. GRADE: B
Posted by Chris at 9:44 PM

Wonderful blog, I am going to spend more time reading
regarding this subject.