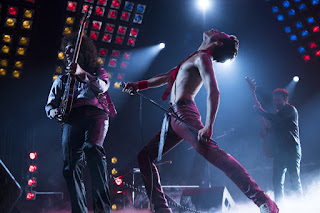 “Bohemian Rhapsody" may not be the movie everyone wanted but it’s the movie we’ve got and for all intends and purposes it’s pretty damned good. It’s easy to piss on the film because of its notorious behind-the-scene troubles. Director Bryan Singer was fired weeks before the film finished shooting; another director (Dexter Fletcher) was brought in to complete the film and see it through post-production. The sour note is the fact that Singer received sole directing credit. Does that suck? Yes. Should the film be punished for it? Not really. “Mr. Robot” breakout Rami Malek stars as Queen frontman Freddie Mercury and he’s simply stunning in the role. It’s as if he’s possessed by Mercury’s spirit; it’s impossible to take your eyes off him for over two hours. “Bohemian Rhapsody” isn’t going to win any awards for its originality; it hits all the standard music biopic notes: rise to stardom, drugs and alcohol, fall from grace, redemption. Music biopic screenwriting 101. But it does offer an electric lead performance and a standout ensemble, stunningly realized music sequences, and an emotional pull that I found strangely comforting. In the end, I was starstruck and film’s manipulations got me hook, line, and sinker. I loved every minute of it.

Rami Malek. I hope his charisma and equally introverted and extroverted vision of rocker Freddie Mercury will send him all the way to Oscar nomination glory. He’s transfixing; everything from his goofily over-sized teeth to his impressive moves, he becomes Mercury. It’s beyond just imitation. Sure he’s most lip syncing most of the time but it’s pretty seamless. His bandmates played by Joseph Mazzello (as John Deacon), Ben Hardy (as Roger Taylor), and Gwilym Lee (as Brian May) are all great and impressive doubles for their real-life counterparts. Lucy Boynton is good as the love the Mercury’s life Mary Austin.

The film is sort of a “best of” with plenty of well-staged music numbers featuring all the great Queen songs including a spectacular finale at their notoriously well-received appearance at the 1985 Live Aid concert. Sweeping camera moves and spectacular sound design make you feel like you’re there. Then of course is all the drama that comes with music biopics. This is obviosly not the film’s strongest element but it works well enough.

Originally conceived by Peter Morgan who gave us, ironically, “The Queen,” the film went through many iterations before settling on the work of screenwriter Anthony McCarten. The film doesn’t feel overly controversial in the portrayal of Mercury or his band mates which is probably because surviving members were involved in the production. For a big budget studio-baked production the film doesn’t shy away from the queerness factor. Mercury is portrayed as falling in love with a woman but it becomes obvious to her, him, and to us as the film progresses that he’s not being true to himself. The film handles it well enough. Maybe if the film had been more “indie” things would have been handled differently but the film doesn’t “straight wash” Mercury in the slightest. McCarten’s script even takes liberties with some of the real life events and the historic timeline for creative and dramatic purposes but this isn’t a documentary. I don’t even think a narrative film about a real life person even exists that is 100% accurate.


“Bohemian Rhapsody” was completely intoxicating from beginning to end. Maybe it doesn’t quite have the edge that many think is required to be completely honest about who Mercury was (the film’s PG-13 rating being proof of that) but did this film need dirty language and graphic sex just to seem more “realistic” or “true?” Hardly. It’s not as if it Disneyfies Mercury’s life. I found his outward struggles with fame and his inward struggles with himself relatable and ultimately moving. It’s even just impressive to have a studio backed film about such an iconic queer person. The film is solid entertainment, emotionally engaging, and unsurprisingly has a killer soundtrack that completely brings the house down. The extremely likable Rami Malek commands the screen and makes me want to listen to Queen nonstop until the end of time.  GRADE: B+