American Crime Story Hotel: Good Times to Be Had at “Bad Times at the El Royale” 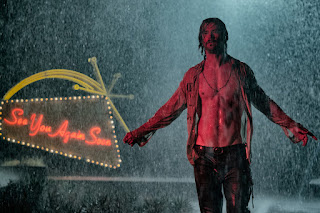 “Bad Times at the El Royale” is one of the more original films to come out in a while. But it has more than its fair share of debt to pay to the noirish crime films that have come out before it. I’m thinking basically everything Quentin Tarantino has done in the past twenty five years. Maybe it’s not one of the most original films to come out in a while. Ok I’m not being fair. It’s a highly entertaining and engaging film. But I’m not sure if it’s quite as hip and cool as it thinks it is. The same goes for writer/director Drew Goddard’s previous effort “The Cabin in the Woods” which was more of an insult to horror fans than the tribute it thought it was. “Bad Times at the El Royale” is a stylish and weird neo-noir crime thriller with a killer 60s soundtrack, some standout performances, and a wacky script. But you won’t leave the film overly moved and you probably won’t be thinking about it days later. The film certainly knows how to entertain though.

Seven strangers at a hotel. That’s the premise. The El Royale used to be a swinging hot spot, sitting right on the line between Nevada and California. There’s a priest (Jeff Bridges), a lounge singer (Cynthia Erivo), a traveling salesman (Jon Hamm), a young woman (Dakota Johnson) with a girl tied up in her trunk (Cailee Spaeny), the concierge (Lewis Pullman), and the charismatic and perennially shirtless Chris Hemsworth. They all have reasons to be at this hotel at this particular moment, and while that feels forced and contrived, you really just have to go with it.

How much more can be said plot-wise without getting into spoiler territory? Pretty much nothing. Money is involved, two-way mirrors, and lots of great Motown songs. And that brings me to the standout here (don’t worry, Chris Hemsworth’s writhing abs who appear to be audition for Magic Mike 3 come in second) which is stage actress Cynthia Erivo in one of her first major film appearances. The only crime she commits is stealing the entire film with her performance and her amazing voice. She’s simply mesmerizing. If it were December we’d be talking Oscar. Everyone gets their moment actually. Johnson is miles away from that bland “Fifty Shades of Grey” nonsense and Lewis Pullman (son of Bill) is definitely a rising star. Veterans Hamm and Bridges do fine work as well.

Oh Drew Goddard why must we have such a difficult love-hate relationship? You’ve made a fun, fascinating film. But, like Frankenstein’s monster (hey it’s almost Halloween), it sort of feels cobbled together from bits and pieces of other great movies. Don’t get me wrong, the movie is actually pretty sensational and the clever editing and twists and turns keep me fully engaged. But you can help but a feel a slight sense of, we’ve sort of seen all of this before. Picture a "best of" Quentin Tarantino. It’s still leaps and bounds better than “The Cabin in the Woods.” While that movie attempted to deconstruct horror films it ended up insulting them instead; “Bad Times at the El Royale” feels way more of a tribute than a ripoff even if it doesn’t exactly break the mold. It’s at least worth checking in.  GRADE: B