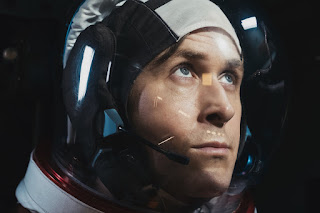 Americans are just as fascinated with space movies as they are with space itself. “The Right Stuff” told the story of the first men in space, “Apollo 13” was about the disastrous 1970s moon mission, “Hidden Figures” was about the unseen geniuses behind some of NASA’s successes, and “Gravity” turned space into an intense thriller with nary an alien in sight. And now we orbit around to the first man to walk on the moon, Neil Armstrong in “First Man.” The moving and intense film seems like an odd choice for director Damien Chazelle hot off his Oscar win for scrappy musical “La La Land;” so now we have a scrappy space drama. Featuring likable performances from its leads and a surprisingly gritty sense of realism, “First Man” is a fascinating look at the events leading up to Armstrong’s historic moon landing and just how grueling the journey truly was. And to think it was done fifty years ago is simply astonishing.

“First Man” isn’t going to change your life. It has no real social message; it’s a historical document that is meant to engage and entertain. It’s about the theatrical experience and about the importance of the journey since we already know the destination. (I think this is also why his “La La Land” faced such intense backlash, when compared to the simplicity and beauty of “Moonlight” which told a story rarely seen onscreen that could change lives rather than just entertain). Chazelle wipes away the color-infused look of “ La La Land” in favor of a muted palette and really nails the look and feel of something from the 60s in which the film is set. It goes without saying that the space sequences are intense, thrilling, and claustrophobic. When the IMAX screen’s aspect ratio opens up as Armstrong exits his spacecraft on the moon it’s as if we’re Dorothy taking her first look at Oz.

Ryan Gosling is fantastic as Neil Armstrong and Claire Foy is wonderful as his wife Janet. Foy transcends the traditional “concerned wife” type performance and makes it something truly compelling to watch. Armstrong’s journey to the moon wasn’t without tragedy, including a tragic death in the family and the watching some of his fellow astronaut colleagues succumb to their own tragic fates. Oscar-winning screenwriter Josh Singer sort of takes the safe route with his script; there really isn’t that much here that hasn’t been seen or done before, but you have to admire a studio wanting to make a mid-budget spectacle about the race to the moon. This is an “adult drama” that feels like somewhat of a dying species.

Chazelle’s fascinating directorial choices is what really pushes “First Man” out into to orbit away from movie-of-the-week melodrama. His pal Justin Hurwitz’s music score is simply phenomenal and some pieces give the film an eerie quality that is catchy to the ear. Linus Sandgren’s cinematography nails the time period and is generally a technical wonder. Its no wonder all of these men walked away with Oscars for La La Land. And Chazelle’s amazing editor Tom Cross who won for his dizzying work on “Whiplash” works wonders here as well.

“First Man” is a wonderful technical achievement; it’s as close to actually landing on the moon as you or I will ever experience. The entire cast is fantastic and the film’s score, camerawork, and special effects are standouts. Chazelle, working in yet another new genre, makes something grand out of well-worn type of story. Will it change society or the world? Does it feel “important?” Not really. The film continues Hollywood’s obsessive fascination with exploring space and marks yet another marvelous technical achievement from Damien Chazelle who refuses to play things save in any of the gorgeous works of art he’s created. GRADE: A-