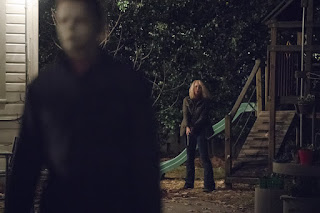 When has a horror movie heroine ever had to return from the grave? Laurie Strode just did. At ten films in, the "Halloween" franchise seemed to be buried and gone after the travesty that was the truly bizarre and terrible “Halloween II.” Rob Zombie we thank you for your service but please go away. This new “Halloween," with its non numerical title, is actually a direct sequel to John Carpenter’s 1978 classic. We’re supposed to pretend that parts 2-8 and 1 and 2 never existed, which I’m okay with because they DO still exist. I’m especially okay with it because this new Halloween, which marks the 40th anniversary of the original film, is a splendid return to form for this iconic if wacky horror franchise. Jamie Lee Curtis gives a fearless performance as final girl (final grandma?) Laurie Strode and director David Gordon Green imbues the film with a sense of dread and nostalgia that never distracts from the fact that we’re actually watching a fantastic story about how tragedy and loss has affected three generations of women. It’s the ultimate slasher flick of the #metoo era and it’s also pretty darned scary.

I promise not to spoil anything but the film begins with the idea that Michael Myers never escaped after his attack on Laurie and her friends and was actually captured and put away for forty years. And if these people have yet to learn anything it’s that transporting Michael Myers is always a terrible idea. A couple of podcast journalists (Jefferson Hall and Rhian Rees) seek to understand the psychotic Myers’ silence. And a reclusive and borderline crazy Laurie Strode (Curtis), who was Myers original target after he escaped from a mental institution 40 years earlier, constantly warns her daughter Karen (Judy Greer) and granddaughter Allyson (Andi Matichak) to be prepared for anything should Myers ever escape again. And he does. Would we even want to see a movie in which Michael Myers doesn’t escape from a mental institution?

“Halloween” is an impressive horror debut for Gordon Green who has a career filled will stoner comedies and indie dramas. His last film also featured themes of PTSD in his Boston bombing drama “Stronger.” In a way it almost makes sense. At least he’s made an atmospheric and scary film even if it can’t hold a candle to what Carpenter was able to accomplish in his original film. It is however, arguably the best film in the series since the 1978 film. Carpenter has returned to score the film giving a mix of new and returning themes. The script features strong characters though there may be too many characters to follow so sometimes it feels like some people are forgotten about. You’d almost expect Curtis’ role to be minor, almost cameo-like, but she really does carry most of the film. Her granddaughter Allyson and her friends give the film a sense of the teen vibe that these slasher films as known for. And lastly the film is way more graphic and the body count is way higher. That makes the film feel a tad disjointed from the 1978 film in terms of continuity since Michael Myers “only” killed five people back in the day but I guess 40 years of pent up rage will do that to a psychopath.

“Halloween” is a fun nostalgia trip (with plenty of fun nods and references to most of the other other films in the series) that is scary and atmospheric. The performances are very good considering the harsh criticisms this subgenre usually receives and it’s really difficult to find any major fault in the smart script (written by Gordon Green, Danny McBride, and Jeff Fradley). The folks at Blumhouse really know what they’re doing when it comes to producing quality horror films and it’s nice to know that Michael and Laurie have come home at last.  GRADE: A-