About a Boy: The Powerful “Boy Erased” is Hard to Forget Despite Its Movie-of-the-Week Trappings 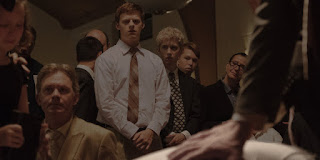 “Boy Erased,” based on the memoir of the same name, follows a college student named Jared who is forced to attend religious gay conversion therapy. His parents are religious and he lives in the Midwest. Not the easiest place to be a gay kid. “Boy Erased” is a really great achievement for Joel Edgerton who is hot off his well-received directorial debut “The Gift.” This film is special because it tells a story that needs to be told and yet it almost feels like a backward step after the progressive ideals of the rom-com “Love, Simon” released earlier this year. Even though that film didn’t allow its main character to be out and proud for a majority of the story, here we’re forced to witness people saying and doing horrible things to innocent gay teens. It’s not always an easy film to watch but I find that it has a lot to say about how “gay conversion therapy” is such an outdated, cruel, and ridiculous concept. After “Love, Simon’s” upbeat ending, “Boy Erased” feels like such a downer even though it’s wrapped up in a tidy emotional bow by the film’s end. As powerful as “Boy Erased” is, with great work from its actors, the film is ultimately a beautifully polished TV movie-of-the-week. But that’s not really a bad thing.

Director Joel Edgerton is an actor. So there’s unsurprisingly great acting in his films. Lucas Hedges is fantastic in the film in a very internalized lead performance as Jared. Nicole Kidman doesn’t have much to do until the film’s second half when she realizes what her son has been experiencing. Russell Crowe has even less to do as the preacher father who is mostly responsible for sending his boy away. You do get a sense it’s because these people do love their son and they’re doing what they think is right, as ignorant as it may be. They're certainly not the open-minded parents we saw in "Call Me By Your Name." The gay conversion camp is every bit the nightmare anyone with even half a brain would think it’d be. Edgerton himself plays the head of the organization and he’s an intimidating presence. You heart goes out to all the other young people forced to be there. The script is also by Edgerton and he sort plays a bit with structure by filling us in on the events that led to Jared being sent away.

Edgerton doesn’t do anything fancy with his camera and instead lets his actors do the work. Besides a sort of flashback structure the film does little else to really wow the viewer. The actors do the work. Jared's fellow therapy inmates are a bit fleshed out. Gary (played by pop star Troye Sivan) is a kid just playing the part until he can be released. Jon (Xavier Dolan) is convinced his therapy is working and refuses to even shake another guy’s hand. What’s most disturbing about this place is how little Jared’s parents actually know about what’s going on there. How a parent could subject their child to something their given little insight into is just sad and disturbing. As heavy as the film can get the film actually offers a sense of hope and is ultimately extremely moving.

I won’t assume anything about director Joel Edgerton’s sexuality but it’s hard to imagine a straight man could but so much love and attention to a story about the trials and tribulations of a young queer man. It’s probably because a majority of the cast is Australian and foreigners just have a more progressive attitude than the average conservative American. In the end, even if the film isn’t necessarily a bold statement visually, the film’s story is very emotionally engaging as are the terrific actors. I think it’s an important film even if it feels like you’d rather be watching a movie where LGBT characters get to just be themselves. The film initially feels like an after school special but in the end I was converted.  GRADE: B+