Love & Breadth: “This is That Night” is a Short and Sweet Rom-Com 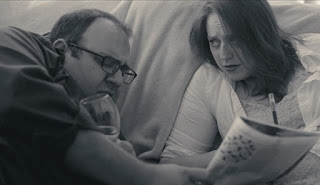 So it turns out “This is That Night” is that movie Woody Allen would have made early in his career. Most Hollywood films can’t establish well-drawn characters in 2 hours let alone thirteen but writer and star Jonathan Marballi is certainly up to the task in his cute rom-com short that is seeing a digital platform release after a successful film festival run.

The simple film observes a man (Marballi playing Jon) and woman (Kris Wiener playing Kris) as they embark on the fourth date of their relationship. Things are going well as the couple appear to be hitting it off, joke around, and chit chat in Kris’ city apartment. Shots of empty plates, wine glasses, and candles burning signify the passing evening as the couple eventually realize that this is the date where they stay up all night talking; and then they hit a rough patch. At that point I’m pretty sure I would of just turned on the TV in a desperate attempt to cut through the awkwardness but the couple is determined to overcome their abrupt conversation block.

Shot in contrasty black and white and filled with old timey music on the soundtrack, this funny and observant short is artistically realized by director Matt Braunsdorf. He directs his actors well; they give perfectly naturalistic performances. It’s obvious Braunsdorf and his actors come from a background in improv (Upright Citizens Brigade to be specific); you feel like you’re just hanging out with friends who enjoy talking in silly voices and having awkward conversations about Christopher Columbus, abortion, and Chinese food. The humorous, dialogue driven film feels inspired by the relationship comedies Woody Allen has wowed film nerds with for decades.

The film captures the clumsiness of new relationships in a way many feature length films barely attempt to do. For what is essentially a short film about two people talking in an apartment “This is That Night” really gets human behavior right. It helps that the performers have a natural chemistry and even if the funny film isn't any sort of visual masterpiece Braunsdorf knows how to make a single location feel like its own character. I really wanted to know where these people ended up. I’m anxiously awaiting “This is That Morning." GRADE: B+

This is That Night (trailer) from Jonny Marbles Films on Vimeo.
Posted by Chris at 12:54 PM