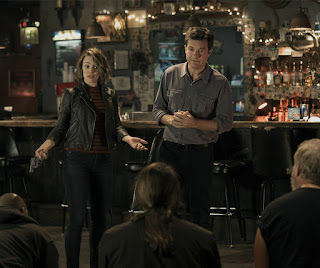 It has been way too long since I’ve seen a truly fun, dark comedy. “Game Night” thankfully fills that void. Genuinely great comedies are so rare nowadays, so it feels like a miracle when a good one sticks the landing. Taking a cue from the recent boom in table top gaming, “Game Night” follows a group of friends who get caught up in a violent mystery during one of their traditional game nights. Of course these friends aren’t exactly hardcore gaming nerds, we’re talking Charades and Scrabble which is why the movie works so well. It’s about non overly intelligent people getting caught up in a ridiculous situation that goes from bad to worse. And it’s completely hilarious to watch them so close to serious injury or death and untangle themselves from the clutches of mortal danger. It also helps that the sometimes clever direction and witty script is pretty observant about human behavior and relationships which imbues the film with a surprising legitimacy. Also, it’s funny as hell.

“Game Night” follows a married couple Max and Annie (Jason Bateman and Rachael McAdams who should be in more films together) who original met during trivia night. The extremely competitive pair continue weekly game nights with friends and are also having trouble conceiving a child. Max’s more successful older brother Brooks (Kyle Chandler) shows up and offers to host his own game night in which he’s initiated a “realistic” mystery game in which the prize will be his fancy new car. There for the game are Max and Annie’s friends another married couple Kevin (Lamorne Morris) and Michelle (Kylie Bunbury) and then there’s hunky but dimwitted Ryan (Billy Magnussen) who has brought along his date Sarah (Sharon Horgan). An actor playing an FBI agent (Jeffrey Wright) shows up to begin the game and coincidentally two armed robbers break in and attack him and Brooks. The group assume it’s part of the game and that’s when things really start getting good.

“Game Night” mostly works for three reasons. And these are reasons why most successful comedies work. The script by Mark Perez is fresh and funny and offers plenty of fun twists and turns. Even if in the third act things get utterly preposterous. You could tell it’s one of those fun scripts producers were dying to get made. The film also works because of the chemistry of the actors. Bateman and McAdams are delightful together. And it’s been a disturbingly long time since McAdams has been in an outright comedy. The former Oscar nominee and Mean Girls breakout needs to read more comedy scripts. Bunbury and Morris’ running joke about Michelle having slept with a celebrity is milked for all its worth. Magnussen, who plays dumb brilliantly, and Horgan as his older, Irish boss work wonders in their scenes including fun bit with the owner of the game company Brooks used, cleverly called Murder We Wrote.

And lastly, and this is something rarely brought up when it comes to comedy films, is the direction. The guys (John Francis Daley and Jonathan Goldstein) who wrote the equally clever “Horrible Bosses” and previously directed the underrated “Vacation” redo work their comedy magic here. The film’s introduction is well done, the second unit shots featuring cinematography that makes the scenery look like fake game boards, and an extremely impressive and well-choreographed tracking shot later in the film are some of the fun highlights to be found here.

“Game Night” is certainly a welcome surprise. It’s fun, dark, and has guaranteed laugh. Raunchy and clever in equal doses with some really surprising twists make this one to remember. All of this and I haven’t even had time to mention the scene-stealing performance from Breaking Bad’s Jesse Plemons as Max and Annie’s creepy, police officer neighbor. The whole thing is pretty ridiculous in the best possible way, in other words, it’s a winner.  GRADE: B+