Racial Tension: “Get Out” is a Pitch Black Satirical Horror-Comedy 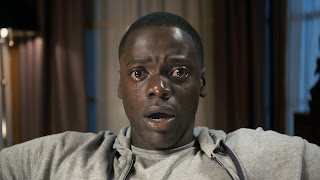 Remember in “Scream 2” when Jada Pinkett's character complained that “the horror movie is historic for excluding the African American element?” Oh if Maureen could of seen “Get Out” she would lose her mind! I don't know if I've ever seen a movie quite like “Get Out;” it's a horror film that's also a stinging satire of race relations. Jordan Peele, of “Key & Peele” makes his directorial debut with a witty, fun, and creepy film about African Americans' fear and anxiety in a still very racist America. Like a top-notch, feature length “Twilight Zone” episode (and influenced heavily by “The Stepford Wives”), the film is a creepy thriller but also features matter-of-fact social commentary that never bogs down the story and doesn't forget its best reason for existing: to be an extraordinarily entertaining and suspenseful film with something to say about our current state of affairs. The best horror films are a reflection of their time and “Get Out” is no exception.

Chris (Daniel Kaluuya) and Rose (Allison Williams) are a young, attractive couple who are preparing to visit Rose's family's estate for the weekend. Chris is concerned that Allison hasn't told her family that Chris is black. She insists that her family isn't racist (her dad would even vote for Obama for a third time if he could) and that won't be an issue whatsoever. The couple hits a deer on the way home and so begins a weird weekend that gets progressively more and more bizarre. Rose's parents seem nice eough. And why wouldn't they be, her mom is played by Catherine Keener and her dad is The West Wing's Bradley Whitford (but he'll always be that jerk Mike from “Adventures in Babysitting”). Chris notices though that the two black house servants seem to be acting funny, like they've been brainwashed or something. The less you know from here on out the better.

“Get Out” is an incredible feature film directorial debut for comedy guy Jordan Peele. It is such a disturbing pieces of filmmaking not only because it's frightening and suspenseful but because it has a lot to say about us as a society. The satirical wit shown here was certainly not lost on me in a world where racial tensions have almost reached their breaking point. We live in a really scary world sometimes and it's reflected back on the screen. Peele commands the frame; the film is unsettling from the opening scene. His actors are amazing, especially Kaluuya whose photographer character has a Star Wars-level bad feeling about this weird family. I believed every minute even if the third act threatens to become a bit over-the-top; I was with Chris every step of the way. And the brilliant moments of witty comic relief, including a scene-stealing LilRel Howery as Chris' concerned best friend, are a welcome relief from the almost unbearable tension.


There aren't enough positive things to say about “Get Out.” It's a must see for anyone even remotely entertained by fans of either scary movies or witty social commentary. The film features great performances, interesting characters and a fascinating and creepy story that takes us down a rabbit hole of bizarre human behavior. See it with a crowd and have a blast.  GRADE: A