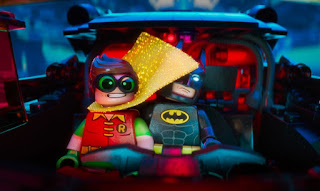 It was only a matter of time before LEGOs became a hit movie franchise. So many people poo-pooed the idea of an animated film based on plastic brick building toys no matter how popular the things were. And then we got “The LEGO Movie” and it was just simply brilliant and way more entertaining than it had any right to be (and that’s why I’m predicting the “The Emoji Movie” won’t be nearly as bad as we’re all thinking). With the advent of super hero fatigue, making an entire LEGO movie about Batman and that entire universe felt like overkill but I’m happy to report that “The LEGO Batman Movie” is a spectacularly entertaining and fun movie. It’s unlike any other “superhero film” you’ve seen before because it’s constantly making fun of itself and the conventions of the genre which is why it’s sort of “The Naked Gun” of animated comic movies.

Argue all you want about who is the best cinematic Batman, but Will Arnett has definitely climbed the ranks. His perfectly suited, grizzled voice fits perfectly and his cameo in “The LEGO Movie” was certainly a highlight. Now, starring in his own film, “The LEGO Batman Movie” follows the as cocky as ever Batman as he saves Gotham City yet again from the evil clutches of the Joker (voiced by Zach Galifianakis). But the Joker isn’t upset that Batman saved the day, he’s actually upset because Batman refuses to say those three little words: “I hate you.” The Joker then concocts a scheme to release all the evil villains locked in the Phantom Zone. Meanwhile, Batman must deal with the loneliness he feels from being the only one in his huge mansion. He reluctantly adopts an orphan named Dick Grayson (Michael Cera), who will eventually become the sidekick known as robin. And not to mention the fact that the new police commissioner Barbara Gordon (Rosario Dawson) doesn’t believe in vigilante justice. It’s hard out here for a batman.

As you may assume, the film is packed to the brim with silly jokes, fun references, delightful cameos, and borderline too much action. First of all, the film is simply gorgeous; the animation is astounding. Like the last LEGO outing the film almost has a stop-motion feel to it. It’s extremely impressive. And second of all, it’s hysterical from beginning to end. There are the silly throwaway jokes like references to Bed, Bath, & Beyond coupons and plenty of nods to every past incarnation of Batman. Batman even spends his lonely times at Wayne Manor watching “Jerry Maguire” in his home theater room.


There are too much fun jokes and references to spoil here and it has a third act that is simply outstanding. Like the last LEGO adventure some of the action is almost too frenetic, but there is such a wondrous spirit to the proceedings. You really get a sense that everyone is putting their best effort forward. The script (lead by Seth Grahame-Smith and a slew of other writers) is witty, original, and cheeky. The film works as a great Batman film and as a great Batman spoof mostly because the director is Robot Chicken's Chris McKay). It’s fun for the kids and probably more fun for adults. “The LEGO Batman Movie” is certainly yet another superhero film you won’t want to miss; in fact, it's awesome.  GRADE: A-
Posted by Chris at 12:34 AM

Members of outstanding calendar moon phase rolex replica watch will display the date combined with this one phase glashuttee replica watches uk classic original function. Moon run round silver at 10 points and 11 points between the arc window. The disc is produced by the cumbersome manual in F Faure F Haim's own factory has over 122 years of replica rolex dial, precision. Diamond carefully cut the moon elegant curve, in the little bit of the background of the electroplating blue background of the stars.