Cut to the Chase: New “Vacation” is Decent If Not Particularly Inspired 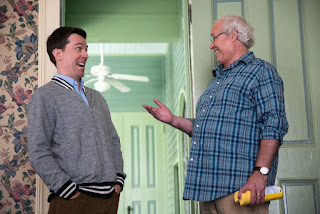 Hollywood is like a greying head of hair. For every remarkable and original film they release there are 5 or 6 remakes, reboots, and sequels that pop up in its place. And eventually you have to just accept it. As an undeniable movie lover, I tend to just give in to whatever Hollywood wants to throw at me. I can take it. And here we are with “Vacation” a sort of sequel, actually it’s pretty much just a sequel, of the popular National Lampoon series about the Griswold family who can’t seem to have a decent family vacation. The Griswolds are one of those families where the kids have seemed to enter some kind of black hole because they never appear to age past fifteen even though their parents grow older from film to film. Not anymore, Rusty Griswold is now all grown up and has decided to take his own stuck-in-a-rut family on a road trip to the one and only Walley World. Hopefully it’s at least open this time.

As a fan of this series of arguably not very good films, this fifth “Vacation” is thankfully not nearly as bad as one may assume. Sure the trailer is filled with lots of raunchy humor but is anyone really surprised? The first film worked because it mixed aww shucks family dynamic with bizarre, hyper adult humor. Does anyone remember the implied incest in the Cousin Eddy sequence? And what about the comedic fate of poor Aunt Edna? Writer John Hughes knew how to draw a nice line between extreme, dark humor and lighter, fluffier wholesomeness. Many will argue the new “Vacation” is all crass and dirty jokes and it is to a point: but there’s way more heart hear than meets the eye. And for god sakes the writers (John Francis Daley and Johnathan M. Goldstein, who also directed) have actually given these people character arcs and the kids finally have personalities.

The kids, in fact, easily steal the film away from stars Ed Helms and Christina Applegate. Steele Gibbons is Kevin, a nightmarish younger brother, borderline sociopathic, who enjoys tormenting his older brother James (Skyler Gisondo). James is the sensitive, musician type who brings along his guitar and various journals on his vacation. Seeing these two go at it the entire movie was simply hilarious to watch even if the behavior was never exactly realistic… but how is any situation in a comedy like this ever realistic? These people take a dip in raw sewage without even knowing for crying out loud. Helms and Applegate work good together as Rusty and his wife Debbie. The two are sort of on the rocks and Rusty feels like a family trip could bring them all closer together.

Yes this is one of those predicable comedies whether everything that can go wrong does go wrong. It’s nothing new. The writers overcome that generally well by at least not just repeating the same situations from the previous films, though there are plenty of fun nods for fans of the series. “Vacation” is sort of a difficult film to hate. It’s a comedy and it made me laugh even if some scenes didn’t exactly showcase brilliant comedic writing or skills. When the film wants to make an easy joke it does: take for instance the segment in which they visit Rusty’s sister Audrey and her cocky southern husband played by Chris Hemsworth. The guy doesn’t really get to do much but talk with a southern twang and show off the giant fake penis hiding in his underwear. As Audrey, Leslie Mann seems sort of wasted: not to take anything from the lovable Applegate, but I probably would have rather seen Mann in the lead role.

Thankfully the film heads in a direction that was predictable but delightfully familiar: a stop off at Grandma and Grandpa Griswold’s bed and breakfast where Chevy Chase and Beverly D’Angelo make their glorified cameos along with the iconic “family truckster.” This new “Vacation” doesn’t really need to exist and it doesn’t really do anything practically groundbreaking: you get the sense it feels like a nostalgic cash grab, but at least it was funny and like most family vacations, it wasn’t nearly as bad as you were expecting.  GRADE: B

Trailer for Vacation on TrailerAddict.
Posted by Chris at 9:14 PM