Girlhood: The Funny and Truthful “Eighth Grade” is Head of the Class 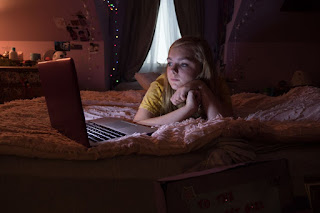 Somehow comedian/filmmaker Bo Burnham, in his feature film directorial debut, has managed to put his audience in the shoes of a 13 year-old girl. It’s equal parts uncomfortable and relatable and is a testament to the power of great filmmaking. Employing a surprisingly fun visual style, interesting music choices including an offbeat score, the contemporary “Eighth Grade” manages to be one of the most fascinating films of the year about the mundanity of life and the repugnance of adolescence. Elsie Fisher gives a fearless performance in the central role of an introverted girl trying to get through the final days of eighth grade while dealing with her social awkwardness. The film takes an interesting look at the role of social media and finds unconventional ways to turn ordinary situations into gripping drama and uncomfortable comedy.

Kayla (Fisher) is an average, quiet 14th year old. Though like kids today, they have to grow up in the presensce of practically being connected to the internet all day long. As an adult it’s convenient. As a child enter ting adolescence I’d have to imagine it would horrible. Sure it’s nice to be able to stick your nose into your phone, play games and music at the touch of a button but kids can be cruel. Thankfully, the film doesn’t go the route of “kids are assholes online” and finds other ways to make clever use of smart devices and social media. Kayla makes online videos where she gives advice on how to be confidence and be cool. These short videos sort of set up how Kayla rarely follows her own advice and puts out a personal she really only wishes she could have.

So how exactly is a film about a 13 year-old girl making YouTube videos all that special? Burnham makes some fascinating, almos avant-garde directorial choices. The way his camera moves, what it selects to show, etc really helps to sell that we’re seeing things fom Kayla’s point-of-view. At several moments in the film the camera dares to slowly gaze Kayla’s crush Aiden (Luke Prael) and we’re forced to literally identify with our main character. When Kayla gets invited to a popular girl’s pool party because the girl’s mother forced her to, Burbham shoots the sequence as if we’re watching a thriller. You can literally feel the anxiety and tension. And Anna Meredith’s synthesized music score is an unconventional knockout that heightens everything.

The film certainly isn’t the first film to tell the story of a young person or the anxieties of growing up, but “Eighth Grade” feels extremely modern and of its time. Todd Solondz has made several colorful movies about the terror of adolescence but his films are almost always a bit wacky. Then there’s something like “Boyhood” which was a different kind of experiment, and this film isn’t dissimilar, though “Boyhood” relied too heavily on young actors who felt a bit amateurish. The performances in “Eighth Grade” are sublime and realistic. Josh Hamilton, easily the most recognizable person in the cast, is perfect as Kayla’s awkward single dad who tries everything to communicate with his quiet daughter.


“Eighth Grade” will certainly take you back to a certain age. I gather for most people it’ll most likely bring up BAD memories but the movie has plenty of humor to help balance the terrors many faced as middle school ended. Bo Burnham and his leading lady are really great finds and this will hopefully lead to even more extraordinary work. I’m truly in awe how everyone involved took such a simple, seemingly insignificant story, for what I assume was made rather cheaply, look and feel so innovative. The film doesn’t judge it’s young characters; they’re people too even if they spend most of their time “plugged-in.” It’s a truly rewarding experience; “Eighth Grade” passes with flying colors.  GRADE: A