Some Like it ‘Bot: “WALL•E” is Out of this World 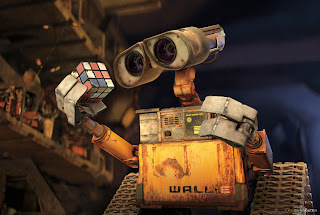 There are a lot of famous cinematic robots. There’s The T-1000, the evil, morphing villain of “Terminator 2.” There’s Johnny 5 from “Short Circuit” who danced his way to stardom with brat packer Ally Sheedy. And of course there’s the duo of R2-D2 and C-3PO from “Star Wars” which are probably most peoples’ favorites. And now we have WALL•E who appears to be a strong mix of E.T. personality and Johnny 5 circuitry to add to the list of famous movie machines with unique personalities. You don’t really need a review to tell you that should going out and see WALL•E right now, but I will praise it anyway. While I don’t know if it’s officially my favorite Pixar film, (that titles still belongs to “Finding Nemo”) WALL•E certainly will be a film that will be remembered for some time (apparently so, it’s currently ranked #9 at imdb.com on the TOP 250 list).

We open in a futuristic (and hardly recognizable) Earth. There are no humans in sight as it appears we have used up all of our resources and have vacated our once beautiful planet. The only thing that is left is a little robot named WALL•E (which apparently stands for Waste Allocation Load Lifter Earth-Class). This robot was made to compact and remove waste. He scoops up some trash, sticks it in his square belly, and a trashtastic cube pops out. He has done this for years and years. He has a curious mind. He finds random human-made objects, like Rubix cubes and Frisbees, which he finds fascinating and collects (ala Ariel in “The Little Mermaid”). And apparently he’s obsessed with the movie musical “Hello Dolly!” His life is quite and quaint, but all that is about to change.

One day a huge spaceship lands literally on top of WALL•E and a small white, hovering machine is released. It’s searching, for what we do not know, but it certainly piques WALL•E’s interest. Before he (I assume he’s “male” although the whole Hello Dolly sort of disturbs that idea) knows it he’s in love with this mysterious robot which we come to find out is called Eve. Soon WALL•E is whisked away when Eve finds an actual living plant and goes into sleep mode. At this point we’ve been watching nearly half the movie with hardly any dialogue, which is practically unheard of for a big budget summer movie. The story is expertly written (by director Andrew Stanton) and the characters are so well defined that in most cases it hardly matters that there’s not much talking.

Soon WALL•E finds himself inside a huge space station that houses the humans of the future. They are fat and unable to walk and must use floating devices that care their large bodies around. They have holographic screens in front of their faces with many viewing choices. But the big question is whether they have TIVO? I don’t see how they couldn’t. Here we meet the Captain who is in charge of this rotund society. It’s around here where the film sort of lost me. Not so much that I was confused but I cared so much about the robots (who form a friendship that seems more realistic than most onscreen relationships in most movies these days) that it was sort of shocking to actually see human begins on the screen. And much to my surprise Fred Willard shows up as the CEO of a corporation called BnL which in turn has practically taken over all these peoples’ lives. What this film has to say about our future isn’t exactly surprising. I guess the humans in this movie didn’t listen to Al Gore.

The movie does have a message about our future on this planet and how we depend too much on technology and you could read into the film a lot, but its more fun to sit back and enjoy WALL•E and his friend. That being said I enjoyed the first half of the film more, as I didn’t really care too much about these futuristic humans as much as I did about a small mound of metal with a personality. And I’d be lying if I didn’t get a little teary-eyed by the end of it all.

WALL•E is a great movie that you should see in the theater. It has such a great sense of wonder and emotion and awe (and beautiful animation) that no matter your age you won’t be disappointed. GRADE: A-

I think the admin of this website is really working hard for
his web site, because here every data is
quality based information.

my web page :: become who wants to be a millionaire meredith