Secret Agent Clan: Steve Carell & Co Hams It Up in “Get Smart” 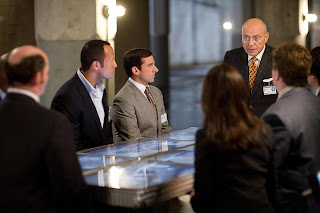 I know nothing of the television show “Get Smart” is based on. In fact, if you had even asked me what I though the show was about before trailers for this movie were released, I’d probably give you a blank stare. I couldn’t even give you a name of one of its cast members. So, in going to see the movie version, of this spy caper comedy, as a completely unbiased person can say that the movie as a whole is kind of dumb but it has its share of laughs, due mostly to Anne Hathaway’s hysterical performance. Got ya! Just kidding. I knew you must be scratching your head after that one. This movie actually rests comfortably on the comedic timing of its male star Steve Carell who has proved in movies (the 40 Year Old Virgin) and television (the Office) that his is the go to guy for funny, dry, deadpan humor. And he’s actually a good actor on top of it.

Ok ok, Anne Hathaway isn’t really bad, but she’s not really the type of actress I really pictured in this role. Frankly I would have rather seen someone like Anna Faris, just because I think she’s funny when she does basic things like blowing her nose. But actually casting someone not quite known for their comedic skills really help to illuminate Carell as the humorous star of the film. Anne is the straight guy and Carell is bumbling, funny fool. Carell plays Maxwell Smart who is a member of a secret government secret agent group called CONTROL. He dreams of being an agent. You know getting out there and doing all the dangerous dirty stuff that James Bond gets to do 24/7. He finally gets his chance when the evil group KAOS has some disastrous plans. He is set up with Agent 99 (Hathaway) and away they go on comedic adventures.

The plot of the film is probably the weakest link here cause I didn’t really care for much about what was going on. Now of course that doesn’t mean I wasn’t entertained, but I couldn’t really see this plotline being as entertaining on a second viewing. However, like I said before, Carell really caries this thing and his lines are funny and his actions are as well. Just look at that scene when he’s finally promoted as an agent and he requests a “cone of silence” and he yells and screams about his excitement. Unbeknownst to him, the entire team has just heard his ranting and raving. And there is one sequence in which he travels by high-speed jet and get’s a little “airsick” that had me laughing for minutes afterwards.

There are some rather random people thrown into the mix here including The Rock himself Dwayne Johnson, who at least is better here than he was in The Game Plan (a film I had the distinguished of honor of NOT seeing, thankfully). And even recent Academy Award winning actor Alan Arkin shows up as The Chief. He has some good lines as well especially when he’s nearly impaled through his head. But probably most random of all is James Caan as a sort of Bush-like idiot President of the United States who actually has some of the funniest scenes in the film.

Over all the film is pretty decent, although days later I’m not really remember too much from it. It does its job as decent summer entertainment (and it has a surprising amount of action that seemed rather well choreographed). I can’t say whether you would like this if you’re a huge fan of the original show, but if you enjoy Steve Carell and brisk summer action comedies than you could do a lot worse. GRADE: B-