About a Boy: The Outstanding “Boyhood” is a One-of-a-Kind Cinematic Achievement 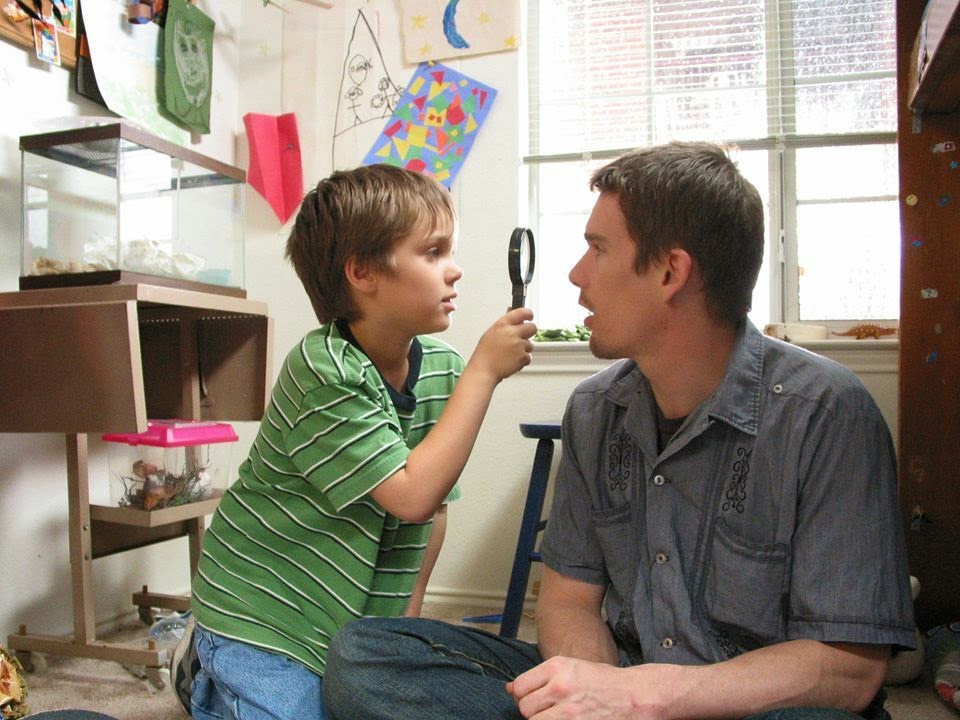 Is there such thing as a tiny epic? That’s what I would use to describe the film “Boyhood.” It’s larger-than-life yet extremely intimate. Director Richard Linklater, a filmmaker I have never personally found a real connection with, has crafted a superb once-in-a-lifetime motion picture that follows a young boy through adolescence into young adulthood. Linklater cast a seven year old boy named Ellar Coltrane and wrote a story that would check in on the boy every year for a twelve year period, filming for a few weeks each year from 2002 to 2013. Onscreen this works wonders as you see the cast age twelve years and you really get to know this boy and his family. It’s a rare, landmark achievement in narrative filmmaking.

Coltrane is Mason Jr a six year old boy living in Texas with his single mom (Patricia Arquette) and his older sister Sam (Lorelei Linklater). His dad (Ethan Hawke) is notably absent except for those rare appearances where estranged fathers show up to spend a day with their kids. Soon mom gets remarried to a college professor, who has two young kids of his own. This guy turns out to be a rather frightening monster of a stepdad. He’s all the more scary because we’re constantly being shown the world through the young Mason’s point-of-view. Eventually they move away, one of many times throughout the film’s story, where eventually mom is way better off and dad even shows up more often. Mason eventually grows up, makes it through high school, and heads off to college and we’ve witnessed a journey we’ve all been through, albeit with obvious differences.

Richard Linklater knows one thing very well: No two childhoods are ever the same, and yet they’re all relatable. And that’s what makes “Boyhood” such a powerful piece of filmmaking. He shows us the regular stuff, the mundane stuff: rides in the car, hanging out with friends, playing video games. And the more intense moments many go through like parents fighting and getting picked on in school. There’s nothing particularly fancy about the way these moments are captured (this isn’t any kind of abstract film like “The Tree of Life” for instance). It is these moments that feel so real it’s mostly because the film is filled with many non-actors and people who aren’t already established stars. Only Hawke and Arquette remind us we’re watching something that could only be made by a guy who has worked both in and out of the Hollywood system. We’re constantly shown this experience through Mason’s eyes, if Mason doesn’t witness it, we don’t see it.

What else can be said about this terrific film that hasn’t already been said? The performances are uniformly excellent, especially Arquette who is a revelation here. Her brief emotional breakdown as Mason heads off to college feels real and earned and isn’t emotionally manipulative or melodramatic. Hawke is also wonderful as the cool but unreliable dad who we also see mature into a more solid adult human being. His relationship with Mason is one of the film’s strongest elements. Linklater’s real-life daughter Lorelei as Sam is relatively amateurish, but feels authentic. Seeing all of these actors grow and change and literally mature over the course of nearly three completely absorbing hours is simply fascinating to witness.

“Boyhood” is almost like the most fascinating reality show ever conceived, except it always feels real and legitimate and never prying or exploitative.  Linklater’s almost insane decision to shoot his film over the course of twelve years has added so much to his simple yet poignant story about family and growing up. He’s managed to capture a boy’s entire childhood with striking precision and relevance and realism. It’s relatable, touching, funny; in other words, it’s something special.  GRADE: A

Trailer for Boyhood on TrailerAddict.