The Suck Zone: “Into the Storm” Offers Decent Tornado Action and Not Much Else 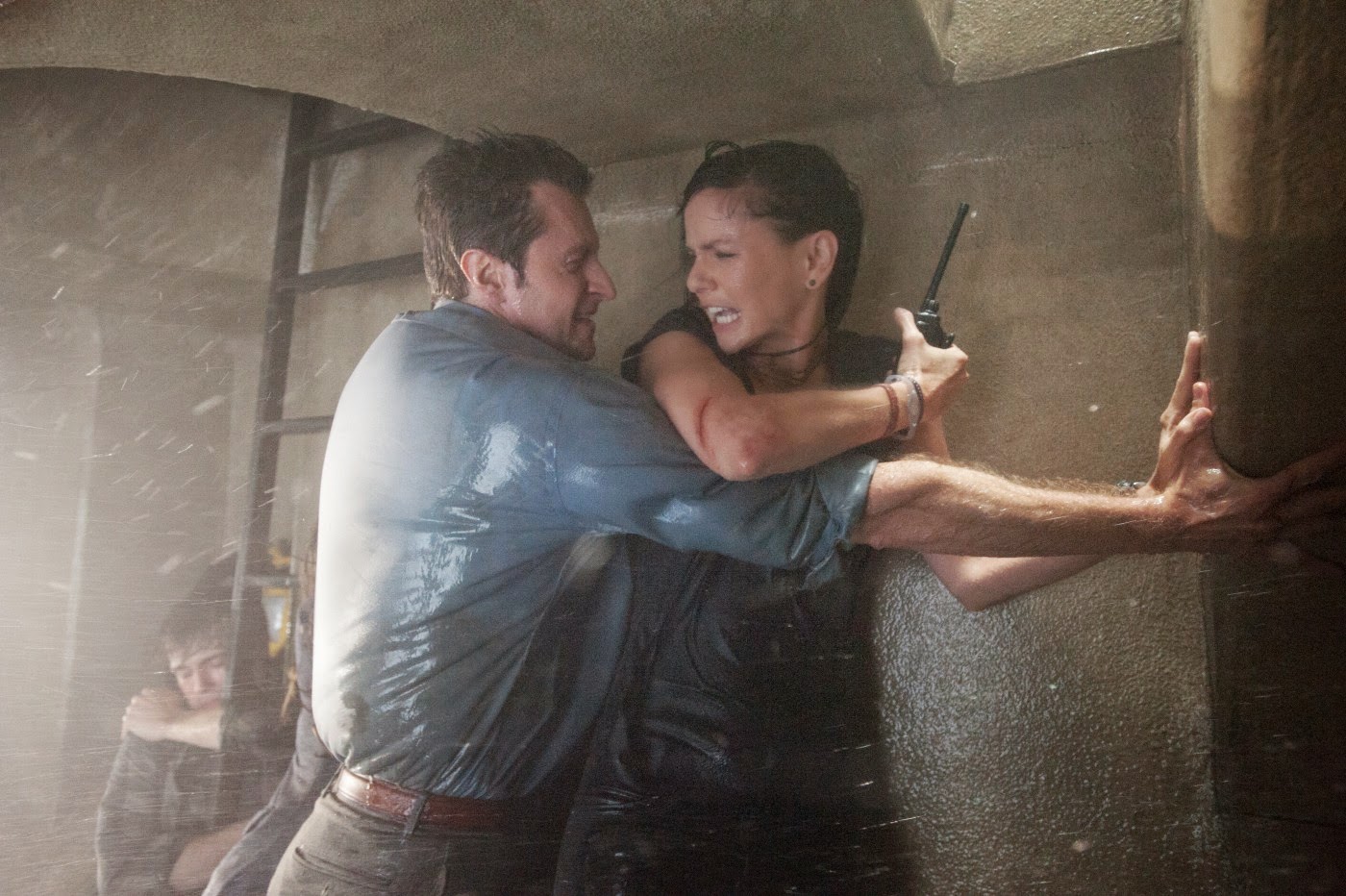 Well at least there are no sharks in these tornadoes. “Into the Storm,” a new “found footage” style disaster film from the director of “Final Destination 5,” gets a lot wrong. The idea of shooting a weather disaster movie like this isn’t necessarily a stupid idea but even director Steven Quale sort of gives up half way through, presenting us with shots that are very clearly not from any character’s point-of-view (and surprisingly a non-diegetic film score). I’m willing to forgive that sort of stuff, but what I’m not willing to forgive is the utterly stupid characters that are presented before us and we’re forced to endure for the brief 89 minute runtime. It’s hard to not make comparisons to the almost nearly as critically trashed tornado opus “Twister” but this film, while offering some stunning if not particularly memorable action scenes, has some just downright awful things going for it and is hardly able to recover.

There are several sets of characters we’re forced to follow along until they eventually all randomly join together for the film’s climax. First we have Donnie (Max Deacon) a high school junior, who’s commissioned with making a video time capsule for his school. He’s tasked to also film the upcoming senior graduation, which is set to take place outdoors even though the weather forecast looks dreary. He has an obnoxious younger brother Trey and a widowed dad who “just doesn’t understand him.” Donnie goes against his father’s wishes and ends up in an abandoned factory with his coed crush Kaitlyn (Alycia Debnam Casey). Meanwhile, filmmaker/storm chaser Pete (Matt Walsh) shows off his tank-like vehicle which is impervious to winds up to 170 mph, even though many strong tornadoes have winds in access of 200 mph, but I digress. (For those interested, tornadoes are now rated on an EF scale – Enhanced Fujita – while in “Twister” they used the now outdated regular Fujita scale). Pete’s goal is to film inside a tornado. He has a team of cameramen and a meteorologist Allison (Sarah Wayne Callies) tagging along. And then there are the clichéd redneck hillbillies who are “YouTube” daredevils who film themselves doing stupid things. They’re in a totally different movie.

I still don’t care about any of these people or the pathetic makeshift plot that screenwriter John Swetnam has come up with. In the end it doesn’t really matter because what anyone who sees this movie comes to see are the tornadoes. These twister scenes are intense and powerful, but here’s my one gripe: the tornadoes have no real personalities. “Twister” for all its stupid plot elements and silly characterizations, it has some pretty memorable twister scenes. Each twister was bigger than the last and each felt one felt distinct from the other. Here we’re given tornado after tornado which doesn’t really amount to anything too memorable besides one that is literally ON FIRE. And then there’s the obligatory EF-5 finale twister which is always the one that’s nothing like anyone has ever seen. Pete, like Dorothy in “Twister,” really gets to fly here in a sequence that is utterly ridiculous and yet startling and disturbing. Let’s just say it would make a good theme park ride someday.

So if we can finish things up here, these are my final thoughts. The movie is all about cool special effects, and for a lower budgeted movie they’re pretty decent. Some of these scenes are pretty intense. Any scenes that don’t include CGI tornadoes are downright terrible. The shaky cam effect does feel rather forced and is altogether abandoned in parts probably because this particularly style of filmmaking has become simply inane. “Twister,” for all its faults, is definitely the superior tornado extravaganza.  There just isn’t the same level of talent (on screen and off) involved whatsoever. If we can learn anything from “Into the Storm” it’s this: when a tornado is heading your way put the camera down and seek shelter immediately.  GRADE: C+

Trailer for Into the Storm on TrailerAddict.
Posted by Chris at 9:48 PM