The Woman with the Golden Gun: “Spy” is a Surprisingly Funny Action Comedy 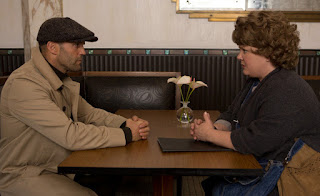 “Spy” could have easily gone either way. To be honest, I was originally predicting an atrocious “Paul Blart” level piece of crap especially after Paul Feig’s last film “The Heat” failed to capture the same comedic highs as his modern classic “Bridesmaids.” Not that there was much necessarily bad about “The Heat,” though I had generally mixed feelings about the mix of comedy and action. That kind of thing isn’t always successful. Luckily, his latest endeavor is a real highlight being a sort female James Bond-like comedic adventure. It’s a formula that should feel worn out, stale, and just plain overdone but somehow it all works thanks mostly to the continued comedic brilliance of Melissa McCarthy and Rose Byrne in yet another showcase supporting role.

No one would ever believe Melissa McCarthy as a lethal CIA field agent so when “Spy” opens she’s just Susan Cooper, an office worker who literally works in the rodent-infested basement of the CIA. She’s in the earpiece of field agent Bradley Fine (Jude Law in a rare comedic role) giving him directions as he shoots, runs, and does other spy movie things. However, after a tragedy occurs Susan convinces her boss, played by Allison Janney, that she should go into the field to find a deadly arms dealer, as she’s one of the few agents the bad guys have never laid eyes on. She’s given the corny “secret identity” of a permed loser (and then one of a crazy cat lady) as she’s assigned to observe. Of course, one thing leads to another and she’s eventually interacting with the villainous Rayna Boyanov (Byrne) who is Susan’s number one enemy.

For an action comedy, there’s actually a lot of plot in “Spy” and many twists and turns that was difficult to see coming. Feig, who is the sole credited writer here, actually has crafted a decent screenplay even if his direction could have been slightly tighter (the film perhaps goes on a few minutes too long). Although for a guy known for directing comedies has some surprisingly decent action and fight scenes. The real highlight there though is the chemistry between McCarthy and Byrne which has been apparent since their appearance in “Bridesmaids.”

McCarthy is a truly gifted comedian. She gives Susan just the right amount of emotional depth and you can actually believe her transition from desk job to field agent even if the movie is genuinely silly and filthy at times. Byrne, complete with supervillain accent (probably not far from her real life inflection) simply shines and plays off wonderfully with her co-stars. Another highlight is action man Jason Statham, spoofing his macho man image to great effect here as a rogue, rival colleague of Susan’s.  If anything, the only part of the film that didn’t quite work was Susan’s co-worker Nancy (British comedian Miranda Hart) whose jokes mostly fell sort of flat. It was obvious they were trying to copy Rebel Wilson’s weird British roommate from “Bridesmaids” but are not nearly as successful.

Overall, “Spy” is an outstanding action comedy. Anyone who’s even the slightest fan of any of these actors would be doing themselves a favor and checking out this funny romp. Feig actually proves he can direct both action and comedy (and write for that matter) even if his editing skills aren’t always up to task. McCarthy is a comic genius and in the right hands and script, as she’s proved time and time again, is simply a comedic force to be reckoned with. Enough so, that the announced female-driven “Ghostbusters” seems to be a better idea as time goes by.  GRADE: B+

Theatrical Trailer for Spy on TrailerAddict.

The bezel, the case, crown guard and clasp are all matte black, and the caseback is see-thru, exposing a rolex replica automatic movement, but we’ll talk more about it in the next part of this rado replica sale, the movement part. The bezel rotates only counterclockwise, in a smooth and very pleasant fashion. The inlays on it match perfectly the markings on the dial, especially the mini-scale rolex replica sale. I’m very excited about the leather strap, as replica watches sale really exceeded my expectations. It’s not quite like the original one, which has small cracks on it, giving it a vintage feel, but it feels very solid and the cream stitching, besides giving rolex replica uk some depth, also matches the markings on the dial and those on the bezel. Overall, this baby is an awesome watch, really manly and certainly tag heuer replica sale you see every day, so it will definitely be a keeper.

The article is very interesting and very understood to be read, may be useful for the people