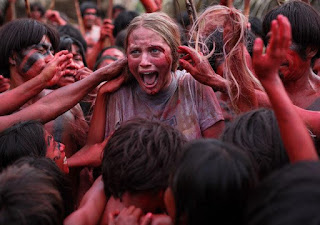 I guess we should all be thankful that Eli Roth has only managed to direct four (not including this month’s Knock Knock) feature films in his not-quite-illustrious career. Believe me, it’s all for the better. He’s fine when he’s helping out his friends by making short films (well, hello “Thanksgiving” trailer from Grindhouse) or making an ass out of himself in stuff like Piranha, but man this horror movie obsessed director makes truly horrendous films. He really just makes the same film over and over again: films in which young people of privilege enter dangerous foreign lands and end up being slaughtered, whether it’s a cabin in the woods, Eastern Europe, or in his latest effort, the Amazonian jungle. Unfortunately, everything you’ll read about how Roth made “The Green Inferno” will be ten times more fascinating than what he put on screen.

Let’s breakdown some of things Roth has mentioned about “The Green Inferno” and how it turned out. If there was any indication that Roth is one of the vainest directors in the world (and there are not surprisingly many) he has said his Green Inferno looks like a Terrence Malick film. First of all, Malick’s films are actually shot on film not whatever hazy digital garbage director of photography Antonio Quercia shot on. The film is as ugly as the movie itself, which was probably the point. The film also stars a woman with no real acting talent whatsoever. She’s Roth’s wife. No surprise there, though they seemed to have tied the knot after the film was shot. Lead Lorenza Izzo plays college freshman Justine and she just wants to make a difference. She hates genital mutilation, for instance. Who doesn’t? Izzo comes across as a D-list version of Eliza Dushku, who was already C-list anyways. She joins up with a group of campus activists who want to head into a South American jungle to protest an evil lumber corporation. Fine do that. Seems pretty dangerous to me. Roth says the film is a commentary on what he refers to in today’s society as “slacktivism.” In which the younger generation uses social media to complain about issues and support causes without ever actually doing something about it. Um, Mr. Roth, doesn’t flying to another country and chaining yourself to a tree in the middle of the jungle count as more than a tweet? But I digress.

The first half of the film is the story of college protesters, but on their way home their small plane crashes and lands them in the middle of the jungle. The irony is that the native people they were trying to protect turn out to be cannibals and decide to serve the students for dinner. Roth even cast a real tribe (they’re not really cannibals though, if you really wondered) as the natives – people who had never heard of let alone seen a film. With “The Green Inferno” Roth, ever the horror nut, is attempting to pay tribute to the cult films he loves – here the subgenre of Italian cannibal films, such as “Cannibal Holocaust.” Though, ever the narcissist, he mostly ends up copying himself, as the film follows the same formula as his torture porn hit Hostel. That film’s first half played like a frat boys go to Europe sex comedy before nosediving into the dangers of Americans traveling to foreign countries. This time it’s just college activists heading into the foreign jungle. Same dog, old tricks. And this time Roth can’t even make the activists more appealing than horny frat guys. They’re all clichéd dummies (you’ve got your potheads, your vegans, etc) who we can’t wait to see get ripped apart. At least the graphic makeup effects are decent. Once the film’s cannibal plot kicks in it’s pretty relentless; I’m not sure what they had to slip to the MPAA ratings board to secure an R rating actually. And I’ll give you a guess whether genital mutilation figures in somehow.

When disgusting, graphic violence is the only appealing aspect of your film (besides its nicely designed opening titles), I’d say you failed. Even in a horror film. The gore works but nothing else does. Roth has created a movie filled with so many uninteresting characters, played by actors who can’t act, an uninvolving story, and to top it all off it all just looks ugly. Not to mention all the unintentional laughs – pray Roth never makes a straight out comedy. You’d be doing yourself a favor by just watching the superior “Cannibal Holocaust” instead; it is way more barf-worthy (in the good way, of course).  GRADE: D+

Trailer for The Green Inferno on TrailerAddict.