Kiss Me Cate: “Carol” is a Moving, Impeccably Crafted Film 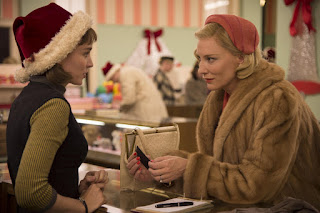 “Carol,” a lesbian drama set in 1950s New York City, doesn’t necessarily seem like my cup of tea. It doesn’t help that it’s from the guy who made the melodrama inspired “Far From Heaven” and the ambitious and strange but ultimately disappointing Bob Dylan biopic “I’m Not There.” The hype is real however, as “Carol” is a completely memorable, moving, and fascinating piece. The first thing you really notice about this film is the look of it. It’s impeccably put together. The costumes, the set design, it all seems authentic. Even the characters and performances feel out of a different age, but in a good way. It doesn’t necessarily feel like it was from 1952 but the film does feel like it’s from another time. However, it obviously deals with issues that were way too taboo for 1952. The film is about love and the type of love that would never be at the center of a film from the 1950s. It has amazing, subtle performances and a tight effective screenplay.

“Carol” is based on a Patricia Highsmith novel. I always tend to associated Highsmith adaptations with Alfred Hitchcock because of “Strangers on a Train” and the Hitchcock influenced “The Talented Mr. Ripley” but here the story’s thrills involve the “forbidden” relationship between two woman. One is Therese (Rooney Mara), a young aspiring photographer who works at a city department store. She catches the eye of an older woman named Carol (Cate Blanchett). Carol is in the middle of a divorce from her husband (Kyle Chandler). The two woman hit it off after Therese returns Carol's gloves that she leaves at the counter. Before they know it something comes a hold of them. And obviously, since it's the 1950s they're not exactly sure what it is, what it means, or how to exactly deal with it. And that's why love stories like this can be so fascinating, knowing how much society changes (and in many ways even sadly stays the same).

What is so great about “Carol” is it's overwhelming sense of style and beauty. The film was shot in 16mm which gives the film a rugged but stunning look and feel. The cinematography is pretty astounding and the film's music score by Carter Burwell matches the visuals quite nicely. The real standouts here are obviously Mara and Blanchett who act the crap out of this one. Mara is especially great here. Her performance is subtle and quiet, but it fits the character. The film eventually becomes a road trip movie echoing the lesbian undertones of “Thelma & Louise” decades later. And the film's exploration of this so-called forbidden relationship is expertly handled by Haynes. He has a real eye for period detail. So many of the actors feel like they were transported from 1950s cinema.


“Carol” is a beautiful film and I'm actually quite flummoxed but it's absence in the Best Picture lineup (especially considering it has the Weinsteins behind it). The film is a technical wonder and a fabulous recreation of the 1950s. It's a film about a homosexual relationship without ever becoming preachy or political; much like 2005's “Brokeback Mountain.” Both films complement each other quite well.  GRADE: A-

Trailer for Carol on TrailerAddict.
Posted by Chris at 7:46 AM

It is advantageous from one point of view, particularly regarding giving on the web help and speedy assessments. Then again, a portion of the clients incline toward in-house gauges for a touch of clearness about pressing and moving the things. Moving Checklist App