Gimme Some Coven: Indie Horror Flick “The Witch” is Creepy and Disturbing but Unsatisfying 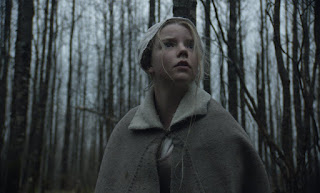 It seems a lot of general moviegoers were disappointed in “The Witch” because it wasn’t what they were expecting. I’m disappointed in “The Witch” because it was exactly what I expected: a slow-moving folktale of paranoia with plenty of disturbing imagery but with a story set in a time period I couldn’t get personally invested in or care much about. I don’t necessarily mind if the latest horror film isn’t particularly “scary” but I want to at least feel somewhat devoted to the characters. How could I relate to this family as they spouted out dialogue I could barely understand? It’s certainly a movie I appreciate much more than I actually like and fits in nicely with other – and more successful – recent indie horror hits “It Follows” and “The Babadook.”

Looking at the film, you’d think director Robert Eggers transported actual Puritans from 17th century New England to act in the film. While most of the actors are unknowns, savvy viewers will recognize Kate Dickie (playing matriarch Katherine) and her flailing nostrils from “Game of Thrones” (as is Ralph Ineson). Dickie and Ineson are a mother and father of five children who move their family from a village because of their differing religious beliefs. Soon Samuel the family infant is abducted. The family is devastated. They however, don’t see what we see: a witch living in the woods doing something completely despicable with Samuel. It’s a disturbing moment that completely sets the tone for the rest of the film. Though Eggers takes plenty of time creating atmosphere and tension before much else happens.

Even for those who don’t necessarily find the film completely terrifying, which I imagine will be many people expecting something less cerebral, the film is a showcase for outstanding production design, standout acting, a creepy score, and moody cinematography. If Terrence Malick made a horror film I imagine it would look something like “The Witch.” That’s probably why the film feels a tad slow and uneventful until the film’s breakneck finale. The film never relies on gore or blood, though there’s plenty of it, so perhaps who were disappointed with another overhyped witch film “The Blair Witch Project” will get more from “The Witch.” The latter film, however, works better on a sheer visceral level of shock and terror that isn’t quite achieved here. Like other recent modern horror offerings it’s a film that’s more fun to admire and talk about then to actually watch but will most likely become better on repeat viewings.

It’s certainly an audacious achievement for first time director Eggers who won the directing prize at last year’s Sundance Film Festival. You never know quite where the film is going or what hat trick he’s going to pull on you which helps with the film’s otherwise languid pacing. Period detail is spot on and the performances are pretty impressive especially from its young cast including Anya Taylor-Joy and Harvey Scrimshaw whose characters both fall victim to the witch in completely different ways. Ultimately, the film feels like it was adapted from a book you would have probably been forced to read in high school. Take that as praise or criticism. Like the film itself, it’s open to interpretation.  GRADE: B-

Trailer for The Witch on TrailerAddict.