House of Pain: The Incredibly Intense “Don’t Breathe” is Out of Sight 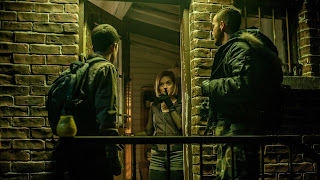 I’m a sucker for a good home invasion thriller. Especially really good ones. “Don’t Breathe” is a really good one. It sort of flips things around a bit by being from the point-of-view of the home invaders while the one being invaded is, in fact, the villain. From Fede Alvarez who directed the surprisingly good “Evil Dead” remake, “Don’t Breathe” is an efficiently made, smart, and almost unnervingly suspenseful thriller. You won’t be doing much breathing during its tightly wound 88 minutes.

Most genre fans will see plenty on influences in “Don’t Breathe.” I saw a little bit of “The People Under the Stairs” and “Panic Room.”  And then there’s a sequence that’s just as tense as the ending of “The Silence of the Lambs.” The film actually takes the less is more approach as nothing in the film is too overly graphic which is surprising considering that it literally RAINED BLOOD in Alvarez’ version of “Evil Dead.” Of course, here, you certainly won’t easily get over a scene involving a turkey baster. You’re better off not showing this movie to your relatives on Thanksgiving.

There’s nothing I like more in a fun thriller than a short runtime and a simple plot. In “Don’t Breathe” three friends make money by burglarizing homes. The unofficial leader Money (Daniel Zovatto) gets some intel that a local blind man who lives alone in a completely rundown and abandoned neighborhood has hundreds of thousands of dollars stashed away from a settlement involving the death of his daughter. They figure it’s an easy score since, after all, the guy is blind. Not surprisingly, things go really wrong, very quickly. Just imagine that if in “Wait Until Dark” Audrey Hepburn’s character was a hulking, raging psychopath.

“Don’t Breathe” is a great example of a real, creative artist at work. Sure Alvarez cut his teeth making a studio remake that ended up surprising many, but here he has much more room to making something to call his own. He layers on the atmosphere. And the characters are likeable even if the make money from ripping off others. Jane Levy plays a young woman with a young son and dreams of a better life. I love the ambiguity of the morality of characters in films like these. You end up rooting for people who aren’t necessarily “good.” Nothing here is exactly black or white. And the house itself where a majority of the film takes place is as much as a character as any of the humans.

I know it’s been said over and over again but with a summer full of retreads and sequels it always seems to be a nice little thriller that gets the job done. It’s a frightening, efficient film and fans of the genre will certainly be pleased with it. This one is bound to be a classic and only promises even more great work from Fede Alvarez and his team.  GRADE: A-

Trailer for Don't Breathe on TrailerAddict.

I like your site and content. thanks for sharing the information keep updating, looking forward for more posts. Thanks
abcya | hooda games