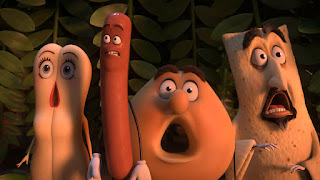 “Sausage Party” is as filthy as you would expect a movie called “Sausage Party” to be. At first it’s a tad jarring to see a bunch of animated characters who are everyday food items like honey mustard, ketchup, sausages, and hog dog buns to be using the f word every five seconds. Initially it seems like the screenwriters were more interested in overly vulgar dialogue than creating a good story but once you really get into “Sausage Party’s” plot and its delightfully controversial ultimate message (there is no God!) it’s much easier to sit back and ride this R-rated train of profanity and hilarious debauchery all the way to its shocking climax. It's like a cracked-out version of "Toy Story."

A majority of “Sausage Party” takes place in a supermarket. All the food items have human features and talk to one another, though to the humans they appear as everyday inanimate objects. These food items believe that humans are like Gods who “choose” them, take them home, and eventually end up in “The Great Beyond.” Of course we all know what happens to food that gets bought from the supermarket. The film follows a foul-mouthed sausage voiced by Seth Rogen named Frank (what else?) who lives in a package with a bunch of others sausages including Carl (Jonah Hill) and the slightly deformed Barry (Michael Cera). Frank has dreams of being “chosen” and going to the Great Beyond with his girlfriend Brenda Bunson (she’s a hot dog bun and she’s voiced by Kristen Wiig). One bad thing leads to another and Frank and Brenda find themselves knocked out of a shopping cart, determined to get back to their shelves before the big red, white, and blue sale begins the next day.

On their adventure back Frank and Brenda meet lots of interesting characters on the way. There’s the Jewish bagel named Sammy Bagel Jr (Edward Norton) who has a rivalry with Kareem Abdul Lavash who’s a Middle Eastern flatbread voiced by David Krumholtz. Then there’s Teresa del Taco, a lesbian taco shell who’s totally crushing on Brenda. And in one of the film’s weirdest and funniest bits a wad of gum takes the form of Stephen Hawking complete with electronic voice and wheelchair. It’s only appropriate in a movie like this that the main villain literally be a douche named Douche (The League’s Nick Kroll) who’s hell-bent on revenge after his nozzle gets bent. There are plenty of clever and witty and borderline offensive characters based on various races, ethnicities, and stereotypes. They leave no one left to be offended. It’s pretty glorious. Not to mention the completely shocking NSFW ending that almost got the film an NC-17 rating. Seriously.


Pardon the pun, but even though the film started off a little rocky for me, “Sausage Party” eventually grew on me. Seth Rogen and Evan Goldberg, who were responsible for the delightfully depraved “This is the End” and co-writers Kyle Hunter and Ariel Shaffir offer an ultimately witty script fully realized by directors Greg Tiernan and Conrad Vernon. The computer animation is appropriately crude and the film probably overstays its welcome a bit but it eventually won me over. It’s utterly ridiculous in all the right places and actually has something to say about this world in-between all the vulgarity, drug references, and raunchy humor. Sure, some of this humor is a little too on the nose but as long as you’re willing to go along for the ride it won’t leave a bad taste in your mouth.   GRADE: B


Trailer for Sausage Party on TrailerAddict.
Posted by Chris at 9:26 PM