War of the Words: Amy Adams is Lost in Translation in the Brilliant “Arrival” 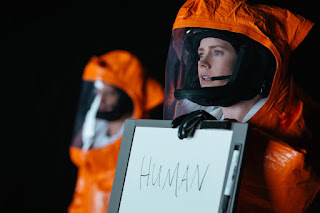 I wonder, if Roger Ebert were still alive would he have liked “Arrival?” And it's mostly because I remember him hating the fact that the alien tripods in “War of the Worlds” had three legs; he referred to them as being “clunky.” The aliens in “Arrival” have seven legs. It is sort of an odd, random number of legs. He certainly would of thought the film itself was a masterpiece. It's an alien invasion movie unlike any you've seen before – and yet it feels someone familiar in the best ways possible. Those expecting to see monuments blown up or other alien invasion cliches will certainly be disappointed; it's certainly more “Contact” than “War of the Worlds.” There may even be those who find the film “slow.” I found “Arrival” to be just short of perfect; a brilliantly conceived and executed piece of science fiction that easily ranks as a new genre classic – another wildly entertaining piece of art from Denis (“Prisoners”) Villeneuve.

Like in “Independence Day” alien spaceships appear all over the planet. Unlike “Independence Day” nothing much happens. They just sort of hover several feet above the ground, giant black spherical masses just floating as if they've always been there. Scientists are sort of baffled but the beings seem to be benign. These are aliens after all and communicating with them is rather difficult. Enter brilliant linguist professor Dr. Louise Banks (Amy Adams in a subtle but flawless performance) recruited by the government to help translate the strange alien language. Louise appears to be a lonely, introverted person. We see glimpses of her past life including the premature death of her teenage daughter which still haunts her and is probably the saddest film opening since “Up.” Louise works around the clock with Ian Donnelly (Jeremy Renner) an astrophysicist and Weber (Forest Whitaker) a US Army colonel.

The aliens ascribe to the “tentacle” body type we've seen in a lot of sci-fi films. Inside the ship, we see them in their own foggy atmosphere behind a glass wall as the scientists try to decipher their strange ink blot-like language. Louise communicates with two aliens lovingly referred to as “Abbott” and “Costello.” They appear to be friendly though as time goes on everyone's main concern is why exactly are they here? The film's third act is certainly a surprising punch to the gut in the best kind of way.

The film features brilliant direction from the always reliable Villeneuve who has such an amazing eye and knows how to tell a story the best of them. He has the charm and visual prowess of a Spielberg and the strange narrative know-how of a Nolan. And was it just me or did some the lyrical visual moments remind you of Terrence Malick? More importantly Eric Heisserer's wonderful script (based on a short story by Ted Chiang) is absolutely solid. There doesn't seem to be a wasted moment and every development is more interesting than the last. This movie is just as much about the characters as it is about the alien stuff and the performances are top-notch. And don't even get me started on Johann Johannsson's superbly creepy score. It's initially disappointing that Roger Deakins was not the DP, who previously shot Villeneuve's “Prisoners” and “Sicario” but Bradford Young is certainly up for the challenge of following the master. The film looks gorgeous and moody.


“Arrival” has been described as “thinking person's sci-fi” and that's certainly true to an extent. But there is nothing remotely snobbish about the film. Sure the film lacks the explosive action of a typical summer blockbuster but it's a brilliantly realized, realistic and ultimately moving piece of science fiction full of drama and suspense. It's a fascinating story about grief, loss, and discovery. It's a must see.  GRADE: A

Trailer for Arrival on TrailerAddict.
Posted by Chris at 9:14 PM