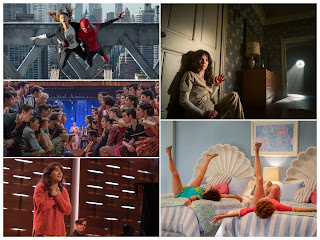 It’s March. The Oscars are one week away. I think it’s about time I finally revealed my favorite films from 2021. Generally I think because of the pandemic, last year was one of the “weaker” years for movies. But at least there were movies even if they didn’t come as frequently as in years past. There were plenty of really solid and wonderful films you just have to look harder for them. Let’s do this!

It’s about time the great Steven Spielberg topped my list of the best movies of the year (The last time was way back in 2005 with “Munich”). His updated take on the 1961 musical West Side Story is so utterly brilliant and gorgeous. Every change subtle or big works in the film’s favor and improves upon the classic but problematic 60s version. I can’t stop watching this film and it’s currently on Disney+ and HBO Max where it deserves to be watched over and over. (Technically it deserves to be watched on a big movie theater screen but not many of you showed up).

Horror master James Wan does it again this time with an utterly ridiculous and original premise about a woman who is haunted by some kind of ghostly apparition that happens to be going around murdering people. You can’t really say much unless you want things spoiled but this thing is just ridiculous and crazy and admire it for the direction that it goes in. Those expecting another classically told, straightforward horror film will be severely disappointed. Malignant is a campy and gory hoot that is not to be missed as long as you know what you’re getting into.

CODA is an acronym for “child of deaf adults” and I’m not sure that’s ever actually mentioned in the film. It follows a hearing teenage girl whose mother, father, and older brother are all deaf. She joins the choir and has aspirations to study music in college which causes tension between her and her working class fisherman family. The film will tug at your heartstrings and is a wonderful, authentic look at a deaf family and the complications that come with having their daughter sort of default to being their interpreter. If the ending doesn’t make you smile or cry you’re not a human.

Oh lord I’m so glad this ridiculous movie exists. Sort of a weird mix of Romy & Michelle, the Muppets, Austin Powers, and SNL, Barb and Star follow two middle aged women who decide to get wild and take a trip to Vista Del Mar, Florida. Bridesmaids writers Kristin Wiig and Annie Mumolo star as the weirdo, culotte-wearing best friends and are super funny. This is a truly bizarre comedy that is certainly not for everyone but it certainly is for me.

6) Shang-Chi and the Legend of the Ten Rings (dir. Destin Daniel Cretton)

Another winning entry in the MCU film. Newcomer Simu Liu and the hilarious Akwafina are simply wonderful together in this superhero origin tale. So many wonderful set pieces; this a kung fu movie for people who don’t really like kung fu movies and I really dug it.

7) The Worst Person in the World (dir. Joachim Trier)

Sort of a Norwegian Annie Hall, this romantic comedy is a wonderful delight. The film follows a young woman over the course of a few years as she navigates life and love and tries to figure out what the hell she wants to do with her life. The film is told in an interesting way and Renate Reinsve gives a charming performance. The film is funny but also goes to some darker places and is ultimately extremely relatable and moving.

Not quite a remake, not quote a sequel. Ok actually it is technically a sequel. A wonderfully creepy take on the Candyman legacy that adds a lot to this genre and like the best horror films, it has a lot of say about society.

I’m pretty sure 2021 will go down as the year of the musical that people didn’t see or watch. Tick Tick Boom! premiered on Netflix and is wonderfully inventive and offers lots of fun, catchy music. Andrew Garfield gives a wonderful performance as Jonathan Larson, the guy who would go on to create the musical RENT. This is a very autobiographical musical. As someone who is faily unfamiliar with RENT (I’ve only ever seen the film adaptation, I know I know) I really dug this and found it to be highly entertaining. Lin-Manuel makes an auspicious directorial debut!

Showgirls director Paul Verhoeven is no stranger to controversy. And he’s probably made his most controversial movie yet! After the critical failure of Hollow Man in 2000 (hey I liked it) he went back to Europe to make movies there. This time he brings us the true story of Benedetta Carlini a novice nun in Tuscany who is able to perform miracles and causes quite a stir in the convent when she beings a relationship with one of the other nuns. It’s Showgirls meets Sister Act meets Stigmata. What else do you need to know? It’s completely bonkers in that perfect Paul Verhoeven way.

11) The Mitchells vs. the Machines (dir. Michael Rianda)

A wonderful animated tale of an ordinary family who has to deal with a sudden robot apocalypse while on vacation. Gorgeous animation, clever humor, terrific voice work, and a fun story and its from the guys who made The LEGO Movie and Spider-Man Into the Spider-Verse so there you go.

If you told me that a movie about the father of two tennis stars was one of the best movies of the year I’d think you were crazy. But King Richard is great! A fairly straightforward “based on true events” tale of Richard Williams the father of tennis superstars Venus and Serena as he helps coach them and mold them into the amazing athletes they became. It doesn’t really break the mold but Will Smith is really good as is the whole cast and I really found this story somewhat intoxicating. 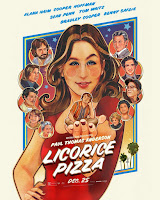 I have a love-hate relationship with PT Anderson; I love sprawling ensemble quality of Boogie Nights and Magnolia but then he got really annoyingly pretentious with things like There Will Be Blood and The Master, etc. Licorice Pizza sort of falls somewhere in between but is a fun throwback 70s set dramedy about coming of age in the San Fernando Valley. I enjoyed the sort of vignette like quality to the story and the cast is fairly strong with the scenes with Bradley Cooper being among the best. 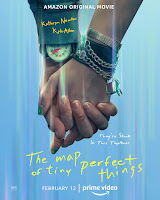 A sort of angsty teen version of Groundhog Day follows a teen boy and girl as they relive the same day over and over again and fall in love in the process. Not unlike the other romantic Groundhog Day comedy Palm Springs, but I found this to be much more enjoyable.

The Daniel Craig James Bond era comes to a smashingly good close with another enjoyable adventure made with ridiculous cinematography and crazy stunt work.

Yes another musical. This is a real delight. And yes Lin-Manuel is involved yet again. Is there anything this guy can’t do?

Yes I liked it. Yes I think it’s campy and silly. And yes I don’t hate Jared Leto in this. It's also transfixing.

Oliva Colman gives another wonderful performance as a British woman whose vacationing by herself on a Greek island and the layers slowly begin to peel back showing why she’s so melancholy. Maggie makes a particularly impressive directorial debut in a film that features some truly wonderful performances and somewhat of an intriguing mystery.

Another movie that Twitter hates. But I laughed a lot. This dark comedy from Adam McKay is easily my favorite of his recent string of “serious awardsy comedies” and follows scientists as they try to warn the world of impeding doom in the form of a comet that is about to strike earth. But no one seems to care. As someone who is a big fan of disaster movies I thought it was a hoot and had something to say. Oh and that cast!

Two couples talking in a room. That is Mass. And it’s fairly riveting. I love movies where you don’t know what is going on until you slowly begin to understand based on the talky dialogue. Nothing remotely flashy here but some searing performances. I’ll probably never watch this again since it’s so heavy but it’s worth a watch if you know what you’re getting into.