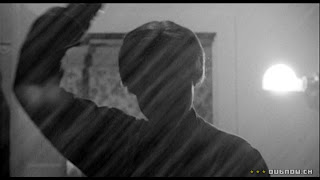 “Oh, just fast-forward to the part when she gets to the motel.” – My mom
During a family vacation to Orlando, Florida we stopped by the Universal Studios theme park. It was 1993, I believe, and I was about nine or ten years old. There used to be an attraction, which sadly no longer exists, called Alfred Hitchcock: The Art of Making Movies. At this age I had not seen nor ever really heard much about Alfred Hitchcock or his films. My parents explained that he was a director who made suspense films. I know I loved movies and I figured hey why not? The first part of the attraction featured a film reel in 3D with a scene from “Dial M for Murder” and an attack from “The Birds.” Then you were escorted into another theater where a recreation of the Psycho set was on display. Here we learned about Hitchcock’s famous “shower scene” which of course I knew nothing about. And as part of the attraction a huge screen was lowered and they showed the scene from the movie. I can’t say that I was completely scared to death, but I was frightened and strangely intrigued. A movie about a guy who dresses as his mother while he kills people in the shower? I was so there! Universal even had a recreation of the original set of the Bates Motel and Psycho house on display at the park which I thought was so cool (Which are now located at Universal Studios in Hollywood). I even brought home a notepad in the shape of the Psycho house and a red pen shaped like a knife as a souvenir. 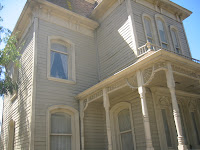 Months later back at home at the local video store, my mom thought it would be a good idea to rent some of Hitchcock’s films. I’m not quite sure what she was thinking, but I don’t regret it. I watched "The Birds" and loved it. I watched "Psycho" which I loved even more. I remember scoping out the videocassette at the store and noticing that it was “rated M for mature.” I asked my mom, “Am I mature?” I think she just nodded her head and laughed. I mean what ten year-old who is the son of a woman renting "Psycho" for her child, is not mature? I went home and watched the movie and I’m pretty sure I had no idea what the heck was going on. The first forty minutes seemed to be about some woman who likes to drive a lot. Finally she checks into the Bates Motel and is brutally stabbed in the shower. I remember they showed the film on AMC one night and I taped it. I had to watch the movie over and over again. And even when I had my friends come over, I’d say, “You wanna watch Psycho?” And we’d put it on and then my mother, possibly herself bored with the film’s slower first act, would insist that we fast-forward to when Janet Leigh gets to the motel.

I’m not sure why I became fascinated with Hitchcock’s masterpiece at such a young age, but perhaps it was fate. I think I was destined to absolutely love the Slasher Genre. Because I think it was basically the year before or year after that I was shown “Halloween” and I was equally terrified and enthralled by it. “Psycho” is a great film for all of the reasons you’ve already heard of. It kills its lead actress in the first 40 minutes. It’s shot in stark black and white because Hitchcock insisted the film would be too gory. Hitchcock revolutionized the way people go to the movies when he employed a “no late entry” policy at theaters showing the film. If the film had started, you weren’t even allowed in. And oh that music! How could you not get chills when those stark strings churn out one of the creepiest stings in all of cinema? The shower scene is still to this day the most famous, and arguably, the best moments in American film. Norman Bates is such a memorable character mostly because of Anthony Perkins’ outstanding portrayal. And let’s not forget he would reprise his most famous role three more times. Yes there are actually a total of four “Psycho” films and I’ve seen them all. I own them. “Psycho II” is a pretty decent 80s take on the Norman Bates saga. “Psycho III” is artsy and easily forgettable but remembered for its famous director (Perkins himself!) and “Psycho IV The Beginning” is a fascinating prequel which shows Norman’s messed up childhood and how he went about murdering his own mother. The less said about the equally fascinating (because it famously used the same script and camera angles) yet horrendous remake the better.

And wouldn’t you know that 2010 marks the 50th anniversary of this classic, groundbreaking movie. (Which was just announced for release on Blu-Ray!) It was a film that shocked audiences around the world, perhaps in part that it was very loosely based on a real killer’s crimes (that of Wisconsin’s Ed Gein), and in my own living room where the memories of first watching Alfred Hitchcock’s Psycho are as fresh as ever. Psycho is a celebration of cinematic sound and vision that will forever hold up as the granddaddy of modern horror and the perfect topping to a brilliant showman’s wondrous career. Thanks mom, for renting "Psycho." I guess a boy's best friend is his mother. GRADE: A+
Posted by Chris at 3:16 PM

The seven vertical columns at the top of the dial show the fake rolex sale months from January to December. The columns got a year disc shat shows from 2003 to 2024. The replica watches sale calendar is set by pressing the pusher at the 2 o’clock. The last two digits of the year are set first and then aligned to the column with the name of the rolex replica uk month you want. Leap years are printed in red. The bottom part of the dial shows another seven columns, containing the rolex replica sale dates from 1st to 31st. The arrangement is more like standard calendars. The days-disk is at the top of the replica watches uk columns. Pressing the pusher rotates both the year and day discs. Some might call the rolex replica featuring a rather busy-looking dial, but at 44mm, it doesn’t overfill.