The Stark Knight: “Iron Man 2” is a Fun and Worthy Sequel, But Can’t Match the Original 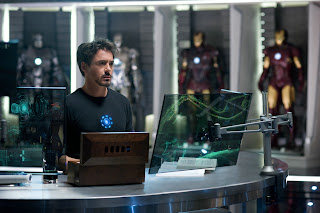 I wasn’t expecting too much from the first “Iron Man” movie back in 2008. I knew nothing of the character, and I figured, hey, it might just be a fun waste of time. It was certainly fun and not a waste of time at all. I was pleasantly surprised. And even thought it came out just a couple months before The Dark Knight, no one was really expecting all that much from Robert Downey Jr.’s portrayal of what seemed like a superhero no one really cared about. I was certainly wrong. The movie did extremely well at the box office and was a critical success. I was fascinated by Downey’s performance as Tony Stark, a hot shot billionaire and CEO of his father’s weapons business. And after a harrowing ordeal as a POW he escapes and becomes the most unlikely and narcissistic superhero of them all. Iron Man was great fun and while I loved the movie, I could honestly care less about the continuing story. Sure I wanted to see Iron Man 2, but much like the first one, I had very little expectations.

I will say upfront, that I think I enjoyed the first “Iron Man” movie, but “Iron Man 2” is definitely a worth sequel and anyone who loved the first movie is bound to like the second chapter. Downey is as wonderful as ever reprising his role as the cocky Tony Stark. I think this guy was born to play this role and it’s too bad he had to spend all those years a complete mess before getting there, but I guess it’s been worth it. We find that Stark’s arc reactor, which is that round thing in the middle of his chest that keeps him alive, is malfunctioning and is slowly poisoning him. He thinks he’s going to die soon and begins to become reckless. He even appoints his personal assistant Pepper Potts (a wonderful Gwyneth Paltrow) as CEO of his company. And he replaces her with the mysterious Natalie Rushman (Scarlett Johansson). It seems like she seems a lot tougher than she looks. Meanwhile, Stark’s competitor Justin Hammer (Sam Rockwell) is trying to come up with his own Iron Man suit technology. The government insists that Stark give up his suit and its technology so it doesn’t fall into the wrong hands. And of course Hammer isn’t the nicest guy in the world and breaks out a Russian bad guy named Ivan Vanko (Mickey Rourke) who caused some ruckus in a wonder scene at a racetrack where he was able to recreate a version of Tony’s arc reactor and used electrified whips. It turns out his father used to work for Tony’s father and he’s bent on revenge for being deported back to Russia.

There is a lot going on in Iron Man 2 and maybe that is its greatest fault. It’s never too confusing, I was pretty much aware of everything going on, but it was a lot to digest. Director Jon Favreau does a good job of balancing everything and he makes scenes that should be exciting very exciting. I loved the scene of Ivan’s attack at the racetrack. And when we see Tony put on that suit with all the CGI metal transforming around him it was certainly a heroic image. Of course once we don’t see Robert Downey Jr. anymore a bit is lost as it just seems like any other fancy robot trying to kick butt. Oh wait there’s more, Tony’s friend Lt. Col. James Rhodes (Don Cheadle replacing Terrance Howard) gets in on the Iron Man fun and uses one of Tony’s suits to help him out. And then there’s Samuel L. Jackson, who exists only for the fan boys who salivate at the idea that he’s trying to recruit Tony Stark into what will eventually be an “Avengers” movie. Writer Justin Theroex who also co-wrote Downey’s fantastic hit “Tropic Thunder” juggles a lot of story in a two hour runtime which he does well enough. But it does seem a bit bloated as if he’s trying to please everyone. It works much better here than it did in let’s say “Spider-Man 3,” which felt like there was too much going on and yet it felt a little hollow.

"Iron Man 2" is a fun movie and a great way to kick off the summer movie season. People who enjoyed the first film will mostly like find something to like here. The film really works because of Robert Downey Jr.’s great performance and I really enjoyed Pepper’s expanded role this time around because she was so enjoyable in the first film as well. Johansson proves she can be an action star and Rourke is perfectly cast. “Iron Man 2” is not a deep film in the way “The Dark Knight” is and I still think the first film works better, but it’s really fun and offers two hours of explosive entertainment that won’t make your head hurt. GRADE: B

The house flag for Cowboys has a liner sewn between its two polyester sides, therefore, this flag is viewable and readable correctly on both sides.Hang your Cowboys House Flag with our banner pole or fly it with our 5' wood flagpole and adjustable flag bracket.nfl flags wholesaleNew England Patriots stars and stripes flags
cheap New Orleans Saints american banners
New York Jets house divided flags

This blog is so nice to me. I will continue to come here again and again. Visit my link as well. Good luck
cara menggugurkan kandungan