Glove Actually: “A Nightmare on Elm Street” is the Horror Remake Dreams Are Made Of 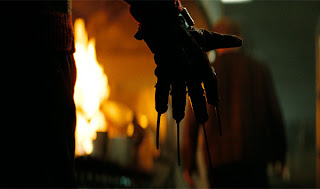 I’ve never been shy about my love for horror films. I’ve never been shy about the idea that it’s actually sometimes OK to remake movies. Heck it’s OK to remake movies I love. Unless it’s “Adventures in Babysitting” cause that would just be crossing the line. So in all honesty I was very much looking forward to the remake of “A Nightmare on Elm Street.” The original 1984 film is one of my favorites and as a whole, the Nightmare series is probably my favorite horror movie series of all time. Having said that and being a true Freddy Krueger fan, I really dug the new flick mostly because it actually improves upon the original film and does something different enough where I actually had little objection. There is a lot to love in this new take on Freddy and his knife glove. But oh where to be begin?

How about with the brilliant casting of Oscar-nominee Jackie Earle Haley as Fred Krueger? Sure to all fans, including me, Freddy will always be known as the role of a lifetime for Robert Englund and not to take anything away from him, but Haley had big shoes to fill and I think he succeeded. Even though the actor is kind of short, he was certainly menacing and the filmmakers did not make him at all sympathetic. That’s the main qualm I had with the other slasher updates including Friday the 13th, Halloween and The Texas Chainsaw Massacre. They made the villain way too sympathetic. He’s a serial killer, not a war hero. In this new version Fred Krueger was a pre-school maintenance worker who got a little too friendly with the students at the school. After allegations that he sexually molested them, the kids’ parents chased him to rundown factory and torched him to death. Now Freddy haunts the dreams of the kids who he used to go after. Now they’re teenagers and they have suppressed these uncomfortable memories.

I’m sure there will be fans who will poo-poo this story element simply because it’s implied that Fred Krueger, when he was human, didn’t actually kill any kids. It can be inferred that he might of killed in the past or that he would have killed the kids, but in this version he’s a creeper version of the character he played so well in “Little Children.” Hopefully he’s not typecast now! It also helps that his make-up job is more “realistic” and reflects what it might look like if a person was actually burned. Those looking for pizza-face Freddy will have to look elsewhere.

We learn that Nancy (Rooney Mara) is having nightmares about a scary, burned man. And so are her friends including her good friend Kris (Katie Cassidy), who we can imply is the equivalent to the Tina character from the original film. I knew that if Kris didn’t get dragged up onto the ceiling, I’d have bad words to say. Luckily the filmmakers, while at times making huge departures, continued to work in versions of the first film’s iconic moments. That includes Freddy coming through the bedroom wall behind Nancy, of course no Spandex was use this time, but rather some corny computer effects. Ehh, I’ll take what I can get.

I actually enjoyed how not being able to sleep was affecting Nancy and her friends. Kyle Gallner, playing Nancy’s potential love-interest Quentin, who you could say would be like the Johnny Depp role, does a good job of making you see what it would be like to be an insomniac. Thank god for Red Bull because he chugs it and he even steals adrenaline when he can from the hospital. These teens are literally scared to death to fall asleep and you can really sense that in their performances. This is something I feel is sort of glazed over in the original film. In that version Nancy is really the only one to lives long enough for the sleeplessness to get to her. She gets bags under her eyes and all, but she never quite emotes what it’s like to be awake for days on end.

The film has a great look and is super stylish thanks to music video director Samuel Bayer who makes his feature film debut. He does a great job of going back and forth between reality and the dream world, and he likes to trick you a lot. He has Freddy jump out a lot, which is standard practice in horror films these days. I jumped a few times. Sue me.

It was nice to finally see a Nightmare film in the theater that didn’t also have Jason Voorhees in it (I’m talking about the poor excuse for a movie Freddy vs. Jason). Everyone involved has done a great job at updating this story for a new generation and Freddy’s knife glove is as creepy as ever. As far as horror remakes goes, this one is definitely superior that most of the other movies that have come out recently. I’m not sure it’ll have the success and power of the original in any way and there really is a feeling of “what’ the point of this” throughout, but if you’re gonna remake a classic at least make it good. Heck, at least it’s better than “Nightmare 6.” GRADE: B

A pay-per-click program, performance pay and the like are the most common ways to get paid for
online work. Basically, when someone asks you to think of
a 'tree', you may think of an apple, a swing or even wood.
extends Async - Task' These are the TYPES of the
input parameters) and returns an object from the type 'Z'.