Waterworld: “Oceans” Shows a Beautiful World Just Beyond the Sea 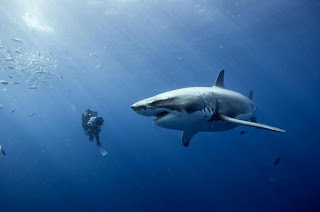 “Oceans” takes us deep into the Earth’s watery depths and shows us beautiful and strange creatures. Some are familiar and some are not. It features beautiful cinematography and some pretty jaw-dropping shots. Unfortunately, if you’ve seen the miniseries Planet Earth or Life on Discovery Channel you probably wont find “Oceans” to be all that informative. Pierce Brosnan, who most people know from “Mrs. Doubtfire,” does a good job narrating, but he doesn’t give us too much interesting information to work with. Of course it’s not his fault, he’s just an actor.

French filmmaker Jacques Perrin directed “Oceans” and also co-wrote the narration. He actually narrated the film’s original French language version and perhaps that narration isn’t as dumbed down as the English dub is. Ok, so it’s not “dumb” it just isn’t very fascinating. But most people, like myself, don’t go see a nature documentary called Oceans for the narration. We go to see it for the visuals. And they are certainly great. I don’t expect anything less than incredible when it comes from the man who was responsible for the stunning images captured in the outstanding Oscar-nominated documentary “Winged Migration.” How he ever was able to capture all those birds’ migrations is truly a wonder to behold. I’m not really sure how he captured some of the images in “Oceans” either.

Probably one of my favorite sequences involved a feeding frenzy. Birds diving into the ocean head first to catch sardines. Meanwhile dolphins, whales and sharks are feeding all at the same time while schools of thousands, and perhaps millions, of sardines flow in beautiful schools that form intoxicating patterns for the eyes. It’s truly a remarkable thing to see and I can’t even imagine being there in real life. It was also interesting to see a man, wearing only SCUBA gear swim beside a Great White Shark. And Bruce didn’t even take a bite. Perhaps they aren’t the killing machines everyone things. In fact, I think I recall hearing a fact somewhere stating more people die from elephant attacks in a year than they do by sharks.

I loved seeing some sea creatures that I had never heard of before. This includes the red colored blanket octopus that looked like it had a superhero cape as it flowed through the water. And who knew that there are jellyfish that are literally bigger than a grown man? And a mantis shrimp is certainly a strange and beautiful creature. And even the familiar critters like sea lions and seals make cute appearance as well. I think I might even want a seal as a pet.

The film also at some points delves into the fact that human pollution is causing harm to the Earth’s oceans, which isn’t the biggest shock in the world, but I don’t feel like the film really explain how to help or how it affects the animals besides the obvious things such as polluting animals’ habitats. It’s not really anything I haven’t heard before. And the film almost treats it as an afterthought.

“Oceans” features some really striking photography and I’m excited to see how the film will look like in high definition on Blu-ray. My theater’s projection was slightly off and images that should have been crisp were almost blurry which affected the power of the images on screen. And of course the simple narration, which in most cases just stated what the animals were didn’t really delve very deeply into anything too informative about the creatures themselves. Overall, the film’s strong images, although I still think “Planet Earth” and “Life” might have done it better, make it worth seeing. The bigger the screen the better. GRADE: B

Hi to every siingle one, іt's geenuinely а good for me to pay a quick visit this
website, it contains useful Information.