Good Grief: “Death at a Funeral” Puts the Fun in Funeral 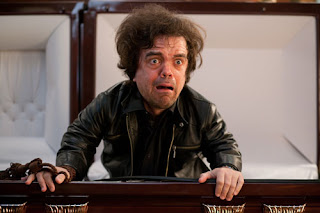 “Death at a Funeral” is the strangest of remakes. It’s a remake of a foreign film that was already in English and, from what I understand, virtually scene for scene the same. Like the “Psycho” remake they’ve added a new cast and color. This time “Death at a Funeral” doesn’t involve a stuffy British family but rather a Black family from Los Angeles. Usually not being a fan of Brit humor I gladly gave “Death at a Funeral” a chance because I actually thought it looked funny. The fact that the script is the same, except for some new references to Twitter and Facebook, doesn’t really bother me. I’m not against the Hollywood “remake.” I think every movie should be judged alone. In fact, I simply can’t wait to see the new “Nightmare on Elm Street.” And I’m one of Freddy’s biggest fans.

But Freddy is for later, what is it about Death at a Funeral that makes it a pretty decent movie? First of all, it’s a farce so it’s going to be pretty unbelievable. We know this because nearly 20 minutes into the film a corpse is knocked out of his coffin and onto the floor. Is it unbelievable? Yes. But that doesn’t make it any less funny. We’re introduced to Chris Rock’s character Aaron. Aaron’s father has just passed away and he’s preparing his eulogy. Of course his younger brother Ryan (Martin Lawrence) is a published author and everyone seems shocked that he’s not giving the eulogy. Aaron’s mother Cynthia (Loretta Divine) takes time from grieving her husband’s passing to point out that she’s still not a grandmother. There are other sorted character’s we’re introduced including Aaron’s cousin Elaine (Zoë Saldana) and her white and very nervous finance Oscar (a hilarious James Marsden) who is mistakenly given acid. It said Valium on the bottle. That bottle belongs to Elaine’s brother Jeff (Columbus Short) a pharmacology student who just so happens to know how to made acid. And there’s cranky Uncle Russell (Danny Glover) and best buds Norman (Tracy Morgan) and Derek (Luke Wilson) who just so happens to be Elaine’s ex-boyfriend.

Wow, so many characters, so little time. And that’s why Death at a Funeral works. There are a lot of characters that we get to see as the afternoon progresses and everyone works well together. Of course a movie like this needs conflict, and conflict takes the form of a little person. That would be Peter Dinklage, the sole surviving actor from the original film (who plays the same role) as a mysterious man who was part of Aaron’s father’s life. I won’t really say much more but remember the name of the movie is Death at a Funeral.

A movie like Death at a Funeral works, despite it’s unoriginal origins, because director Neil LaBute (Lakeview Terrace, nice; The Wicker Man, yikes!) actually directs comedy well. He gives the film a bright look which contrasts with the film’s dark humor. He’s able to cut from one character to another before we have the slightest chance to be bored. While Oscar is busy acting silly and stripping his clothes off and climbing onto the roof, something else crazy is going on, including Norman helping Uncle Russell to the toilet for some trademarked gross out humor. The silliness escalates, and while this stuff is always extremely unlikely to ever occur in real life it’s funny because of its setting (how many funerals have you been to like this?). And the simple set, short run time, and the fact that the film takes place over the course of one afternoon makes it feel very much like a play. It reminded me a lot of “Noises Off!” where a normal situation, a funeral, becomes a crazy situation which includes the bumping off of midgets and people tripping on acid. But if you saw the original you already know this stuff.

Sure “Death at a Funeral” isn’t going to win any awards, but it has some funny lines, inspired performances by actors who fit together well. Even though the trailers make it seem like some Tyler Perry rehash I think it would have an appeal to anyone who likes black comedies and Black comedies. It’s funny, silly stuff. Hey, I might even give that British version a try. GRADE: B

In order to cope inside a fast-paced market, new applications are essential.
Each auction could be conducted which has a different pair of terms including bid increments, amount of
auction rounds and expense reimbursement for your stalking horse.
ll hold the practical guidance you will need on how to begin a concierge business''.

I visited various web pages but the audio feature for audio
songs current at this web page is in fact fabulous.

Free streaming of Velaikkaran from Vijay TV only at Velaikkaran Tamil Dhool TV in HD quality.