Botchmen: “Kick-Ass” Doesn’t Quite Live Up to Its Title 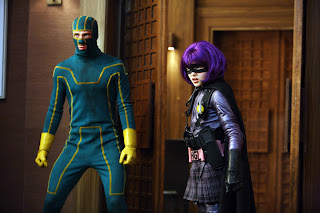 Maybe I just prefer superhero movies less violent? I have nothing against violent movies, bring on Michael Myers, Freddy Kruger and Jason Voorhees. Bring on the buckets of blood and guts. But something about the extreme violence in the Tarantino-esque comic book adaptation “Kick-Ass” sort of rubs me the wrong way. Maybe it’s the fact that the film seems to be marketed towards kids as if it were a Spider-Man film. I imagine a lot of shocked parents when they realize they just took their young kids to see an eleven year-old girl sprout profanity and chop peoples’ limbs off in graphic fashion. Sure Kill Bill is more violent, but how many little kids wanted to even see it? I’m not necessarily agreeing with Roger Ebert about the film’s apparent “controversy” I’m more at odds about how I really feel about the film at all. Is it really supposed to be funny all the way through? And are we supposed to buy into this “realistic” world that the film sets up from the start? I’m not sure I’m buying it.

Some of the ridiculousness seems related to what I saw in the comic book adaptation “Wanted.” There was lots of violence, and unrealistic elements, and yet something about that film seemed fresh and just enjoyable. Maybe there have just been too many superhero movies as of late as “Kick-Ass” just feels like a funnier version of “Watchmen” which is the superior film in many ways. It sets its tone from the beginning and sticks with it. In “Kick-Ass” we’re introduced to goofy high school student Dave Lizewski (Aaron Johnson) who is bored with his teen life. He wonders what it would be like to be superhero. He and his guy friends talk the way most characters talk today with plenty of pop culture references. It sort of feels as if we’re watching “Superbad.” There are some great jokes and some really funny moments and wry observations. But by the time the film ends, I felt as if I was watching “Reservoir Dogs.” What happened? Somewhere along the way the movie sort of dumped me in the middle of nowhere without a way to get back.

I’m not offended by the sight of Damon Macready (Nicholas Cage), who is also the masked vigilante Big Daddy, shooting his daughter Mindy, played by Chloë Grace Moretz, who we will see is also a masked vigilante dubbed Hit Girl. She’s probably more sadistic than her father. She could easily grow up to be on Bill’s Deadly Viper Assassination Squad. Or at least play young Beatrix Kiddo if they were to make a Kill Bill Prequel. Of course we learn she’s just learning to take a bullet while wearing a bullet proof fest. And her poof of feathers as Damon plans a bullet in the vest and knocks the girl off her feet is pretty priceless. Yes, we know we’re in for something bizarre with this movie. But somewhere along the way it completely derails.

Back to Dave, who orders a green wetsuit online and decides to become a superhero because he’s bored. He figures if Batman can do it, why can’t he. He doesn’t need special powers, he just needs a reason to. So he goes out and tries to stop some thugs from stealing a car and ends up getting brutally stabbed in the stomach and run over by a car. This I suppose is “funny” but as shot by director Matthew Vaughn it’s more shocking than funny and somehow I couldn’t find myself laughing at the situation. When Brad Pitt gets hit by a car in “Meet Joe Black” it’s unintentionally hilarious. You laugh. When Dave gets hit by a car it’s unintentionally serious. I didn’t laugh.

Although the Hit Girl character is so controversial, obviously little girls who see this movie are going to want to start chopping random dudes’ legs off, I found Chloe’s performance to be simply wonderful. This young actress has been in a string of hits recently which include 500 Days of Summer and Diary of a Wimpy Kid. She takes the role and just runs with it. Frankly, her character should have been called Kick-Ass.

Maybe that’s therein lies the film’s problem. I just didn’t care too much about Dave. He’s pathetic in a way that most of us are pathetic in high school. He pretends to be gay just to get close to his crush and yet if this was actually real life this girl would actually like him from the beginning, because Dave isn’t really a horrible looking guy. He’s got the male equivalent of “glasses and a ponytail.” And then of course is the film’s plot about an evil drug overload and his son played by McLovin from “Superbad.” Even he has to come up with a superhero alter-ego. To be honest, I think all these people need a psychologist who enjoys a challenge.

There will be plenty of film geeks who will find “Kick-Ass” to be “rad” and “awesomely sick.” I’m not quite one of them. Frankly, I’d rather just watch “Spider-Man” or “Superbad” or “Kill Bill.” Maybe the whole time watching the movie I wished I was watching “Death at a Funeral” instead, who knows? I never really thought the film looked good from the trailers anyways. But Hit Girl is still pretty badass. GRADE: C+

When I initially commented I clicked the "Notify me when new comments are added" checkbox and now each time a comment is added I get
three e-mails with the same comment. Is there any way you can remove people from that service?
Appreciate it!

Hi there, just became alert to your blog through Google, and found that
it's truly informative. I'm going to watch out
for brussels. I will be grateful if you continue
this in future. Lots of people will be benefited from your writing.
Cheers!

To add my insight into the broader need much information should I dig, one of his articles, vidio also one of his pictures as I can see on this page, please be able to provide feedback to me.
At the end of the comment word I say thank you.
alat bantu sex pria
obat kuat pria
jamu kuat herbal

Your website content is very effective and help full for people.I understood that you try to clear that concept about this subject.https://crackstools.com