Fey Ride: Steve Carell and Tina Fey Together at Last in the Hilarious “Date Night” 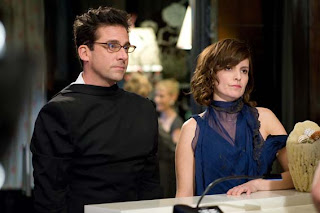 How much someone likes the movie “Date Night” will depend on several factors. One is how much one loves the lead actors Steve Carell and Tina Fey and how much you can forget that “Date Night” isn’t the most original film ever made. You might recall Mr. Carell has a hit show on NBC called “The Office.” He’s also appeared in that Judd Apatow film about the guy who is a 40 year old virgin. Tina Fey, a former Saturday Night Live cast member and writer has her own TV show on NBC as well. It’s called “30 Rock” and although it has won the Emmy for Best Comedy Series three times in a row, it still manages to average about 17 viewers a week. These are talented people and they infuse their talent into their film “Date Night.” Even though both actors have written before they remain only on screen talent here. I can’t help but think if these two wrote this flick it would simply be one of the best comedies of the past five years. Alas it’s simply one of the best comedies of the past five years.

Steve Carell and Tina Fey are a middle-aged married couple. They are Phil and Claire Foster. They have a couple of kids and a regular teenage babysitter. They’re sort of in a rut, much like the couple from “The Out-of-Towners.” And much like the couple in “The Out-of-Towners” they are about to get into a lot of trouble. They decide to take a little risk and travel an hour into Manhattan for dinner at a new posh spot. Unfortunately the place is booked solid, yet a party known as “The Triplehorns” have not shown up for their reservation. Phil claims to be the Triplehorns, and before they know it, they’re being seated and taking pictures of Will.I.Am with their camera phones. Of course it turns out some thugs are after the Triplehorns and they think Phil and Claire have the MacGuffin (a computer flash drive). Soon there are shoot outs and car chases and hilarity ensues as that tends to do in movies like this about mistaken identity. It all sort of reminded me of “Adventures in Babysitting” if they parents had a crazy night instead of the kids. I mean come on; it’s about white suburbanites’ misadventures in the scary big city. Add a little “Cellular” in there and you can pretty much tell what you’re in for.

I can guarantee you’re in for lots of laughs. I’m still shocked that Fey and Carell have never worked together before but while watching Date Night you would assume it was their tenth movie together. They have real chemistry and their comic timing is off the charts. They make silly lines “This pay phone smells like urine” simply hysterical with their brilliant comedic chops. Even if Date Night feels like dozens of other movies it’s all ok, because these people bring a charm that has simply been missing from motion picture comedy since last summer’s surprise hit, “The Hangover.” And while it’s similar to “The Hangover” “Date Night” feels less raunchy, because it is, and more suited to sheer brilliant comedic acting that just trying to be dirty and over the top.

There are some great small performances from some talented folk. This includes the always reliable James Franco and the skuzzy real Mr. Triplehorn and Milas Kunis, who was great in Forgetting Sarah Marshall, shines as well as Mrs. Triplehorn. Mark Wahlberg plays homage to his Marky Mark days as a security man who may be Phil and Claire’s only hope. Ray Liotta makes fun of himself as a sleazy bad guy and he plays it perfectly. He’s had a lot of practice.

I have no idea who screenwriter Josh Klausner is (he’s contributed to Shrek 3 & 4) but he does write some funny lines. I sort of wish the script didn’t have so much of a “been there done that feel” but the actors simply make this movie worth your time. Even director Shawn Levy, who has made other silly comedies like Night at the Museum and Cheaper by the Dozen, while not the most visually exciting filmmaker, knows how to direct comedic actors and pushes them to their funniest. You will laugh a lot in “Date Night.” It’s a fun and brisk movie that doesn’t overstay its welcome. Make a date and see it. GRADE: B+