Remember the Titans: “Clash of the Titans” Remake is a Cheesy and Fun Action Spectacle 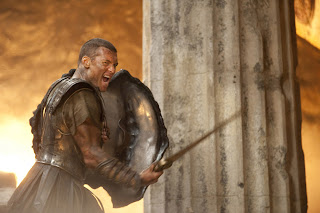 Unfortunately, or perhaps fortunately, I have not seen the 1981 fantasy film “Clash of the Titans.” If it’s theatrical trailer is any indication it is a solid cheese-fest complete with corny effects and even cornier hairdos. At the time it was a big hit and it’s no surprise to think that the new remake will be a solid success as well. If you like action and corny dialogue then “Clash of the Titans” will crave your hunger. I honestly didn’t have much expectations going in. I figured it would be entertaining but pretty stupid. Sure I wouldn’t necessarily call this film “smart” I mean it’s not like it’s going to win a writing award or anything, but “Clash of the Titans” is yet another fun example of why we go see movies in the theater in the first place. It’s all about an experience. And you can have fun and loud entertainment without feeling too guilty about it.

Greek mythology is pretty Greek to me if you catch my drift. Sure, like most people, I learned the basics in middle school, but I wouldn’t call myself an expert. And I think the only reason why I know Poseidon is the God the Sea is because I’ve seen “The Poseidon Adventure” way too many times. Surprisingly with all the weird names and some unknown actors and actresses (with some stars of course) “Clash of the Titans” wasn’t all that difficult to figure out. We learn that Perseus (Avatar’s star on the rise Sam Worthington) is part God. His father, the God Zeus (Liam Neesen), impregnated a mortal woman, but she was cast off and he was taken in by a human couple. Hades (Ralph Fiennes), Zeus’ brother, was cast to Hell to be God of the Underworld. Hades also just so happens to kill Perseus’ family so he’s not exactly thrilled with the Gods as this point. Then Zeus shows up to the humans who aren’t very God-happy and he gives them an ultimatum which may start an all-out war between Man and God. Yikes!

Perseus starts out on a mission to the underworld to defeat Hades and whatever evil creature gets in his way. This includes gigantic CGI scorpions which were a lot scarier than I thought they’d be. They also find some odd creatures who hold eyeballs in their hands and let’s not forget Medusa the scary snake-lady who turns men into stone. All of these battles and adventures sort of reminded me of the The Mummy redo from 1999 as it was a fun-filled CGI-laden journey with scary moments and perfectly timed moments of comic relief. It felt like the perfect summer fun even though its only the first weekend in April.

Since I haven’t seen the original film I can’t quite compare the two, but it seems like the remake follows the original story pretty well. The first film employed stop-motion animation for some of the film’s creature effects including the evil sea monster the Kraken. Here the Kraken is completely CGI, and while I sometime condone this I can’t really see how using stop-motion animation would have made any sense whatsoever. The creature was humungous and I’d be lying if I said the final battle wasn’t very thrilling. Because it was. The movie moves so swiftly that I hardly had much time to realize how completely ridiculous it all really was.

There are two types of mindless entertainment. One is something like last summer’s “Transformers 2” which isn’t fun even when your brain is off. It’s loud and obnoxious because it takes itself way too seriously. On the other hand we have “Clash of the Titans” which yes is loud and mindless but it has a fun enough way about it which doesn’t take itself too seriously. It knows it’s based on a cheesy movie and it embraces it. If anything the movie makes me wish I had paid better attention in middle school. GRADE: B+

Note: I viewed the 2D version and it was great. The film is showing in 3D theaters but be weary that the film was not originally shot with the intention of being shown in 3D and therefore if you choose to view the 3D version you'll pointlessly be paying extra money to the studio executive Gods.