It’s Hard Out Here For a Wimp: “Diary of a Wimpy Kid” is a Clever Look at Life in Middle School 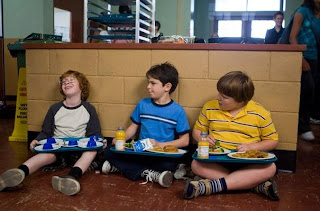 I’m grown up. Sort of. I don’t have kids. But I was one. And “Diary of a Wimpy Kid” will appeal to anyone who was once a kid. So that’s pretty much everyone. So therefore if you think you’re too old to see “Diary of a Wimpy Kid” (which is based on a serious of books) you’re wrong. In fact it think you’ll get more out of it having been through middle school. Movies for kids don’t have to be stupid or dumbed down, and this movie is not. I imagine it’s sort of similar to what Woody Allen might come up with had he written a movie for ten year olds. And frankly, young Greg Heffley is sort of a young Alvy Singer, trying to get through life, a smart guy, who happens to be surrounded by complete morons. Sure I’m not sure most 12 year olds are this wise and observant about life, at least I don’t think I was, but most 12 year old characters in movies don’t really act their age do they?

Our hero is Greg (Zachary Gordon) and he’s about to enter dreaded middle school. A thing that he says is the dumbest thing invented. Everyone is awkward especially him and with his skinny, tiny frame. He’s yet to hit puberty, so worst is really yet to come. His best friend is Rowley, a sweet and charming rotund young boy who sort of coasts through life under Greg’s guidance. He helps Rowley learn to be “cool” and even though Greg himself isn’t very popular, he insists that he is. But oh as the saying goes, it’s hard out here for a wimp. And as this story progresses he will find himself lower and lower on the popularity echelon.

There are many things working against Greg so that we instantly find him sympathetic. He’s cursed with an older brother who constantly teases him and beats him up. Is this what having an older brother really is like? Perhaps I was blessed by only having sisters? Although I’ve always wondered what it would be like to be “beaten up” by a brother. His parents don’t just understand him and I think most kids sort of feel that way. He’s also cursed with an underdeveloped body. He’s surrounded by other boys with hair in places he’s yet to see develop and his skinny frame is forced be a “skin” in gym class. It’s hard not to sympathize with this youngin.

Although you soon realize what does he really have any right to complain about? He’s well provided by his parents, lives in a good home, and seems to have everything he could want, yet he still finds things to complain about. Like having to eat breakfast while his potty training brother goes to the bathroom next to him. And having to attend a Mother-Son Dance. But those are just standard things everyone goes through growing up. The point is he makes pretty funny wry observations about life as a kid. Of course there are silly things added in for the kiddies, like Dad (Steve Zahn) dumping water on unsuspecting trick-or-treaters and an odd subplot about a moldy piece of cheese on the playground. But overall the script is pretty tight and witty, sort of a watered down “Mean Girls” for young boys.

“Diary of a Wimpy Kid” does prove something. That it’s possible to make a family friendly film that isn’t stupid and doesn’t treat kids like they’re stupid. You don’t need singing animals or constantly slapstick humor to get kids to laugh. After all, after seeing this film you realize kids are a lot smarter than we give them credit for. GRADE: B

My homepage: workout routine for women

I've been surfing on-line more than three hours today, yet I by no means discovered any
attention-grabbing article like yours. It's pretty price
enough for me. Personally, if all website owners and bloggers made excellent content material as you
did, the web might be a lot more useful than ever before.